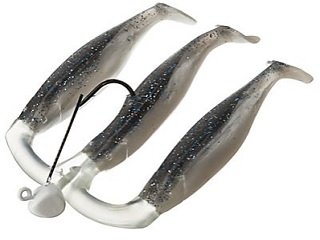 It’s no secret that baitfish congregating in large numbers attract the attention of bigger fish, such as bass, walleye, or pike. Have you ever been to a buffet? You know the feeling you get when you walk in with an empty stomach and see all that food? Yeah, that’s the same feeling predator species get when they see groups of baitfish. It is for this reason that lures—such as the Alabama rig or the tandem rig, for example—have been introduced to the fishing community and have had great success on the water. Today we’ll take a closer look at a new lure that appeals to predator species by imitating roaming baitfish, the Three-For-All, by Mann’s.

Known for its proficiency in creating quality soft plastic lures, Mann’s release of the Three-For-All is yet another addition to the company’s impressive lineup. Crafted to imitate a trio of baitfish, the Three-For-All is comprised of three soft plastic swimbaits attached at the head by a jighead and one of Mann’s patented Hardnose attachments,w hich keeps the baits from interfering with one another. Your line will attach to the jighead’s eyelet, so you’ll have a centered point of contact that will allow the bait to run true during the retrieve.

The bait’s jighead is also equipped with a single weedless 5/0 hook that rests within the body of the center swimbait. The single hook allows the bait to meet single-hook requirements, in spite of the fact that it possesses three lures.

The Three-For-All comes in three color patterns—watermelon red flake, Smokey Joe, and silver shiner—and is available in 3-inch or 4-inch models. With each purchase, you’ll get the single rig, plus three swimbait bodies, so you can attach more swimbaits without having to replace the rig. The best part, each rig—along with the swimbait bodies—costs only $6.49.

The Three-For-All rig from Mann’s is a great option to throw when baitfish are the popular menu choice. Take advantage of the rig’s appeal to empty stomachs and toss it to hungry fish this season.