Anatomy of a Craw 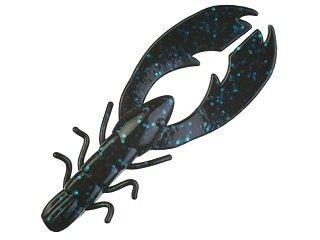 There are some lures and baits that every angler should keep in their tackle box at all times. From spinnerbaits to plastic worms, some lures have become universal must-haves among the fishing community, and with good reason; they catch fish. Plain and simple. The soft plastic craw is another bait that you can add to that list, as well. The bait works so well for so many reasons, and we’ll learn why today as we break down the anatomy of a plastic craw.

Crawfish are one of the most popular prey items for a variety of predator fish species. They can be found throughout the majority of the year, as well as the majority of the country’s waters, which has made them a staple menu choice for fish. Bait companies know this, which is why there seems to be a surplus of crawfish baits on the market. The good news for anglers, though, is that such an abundance of lures from which to choose affords us the opportunity to be a little choosy and experiment with different types.

Even with the variations offered by different lure companies, the design of a plastic craw is pretty straightforward for the most part. They consist of a long, slender body, through which you can feed a hook or jighead. Depending on whether or not the craw is shaped to be a trailer or stand-alone bait, the body might have a few variations. For instance, some craws possess legs, which add a little more visual appeal, as well as water displacement.

Next, you have the craw’s money-making feature: the claws. Because crawfish swim backwards, you’ll want to make sure you rig the bait with the claws facing away from you, since this is where the plastic craw finds the majority of its action. The claws will waft and displace water as you work the lure during the retrieve, and there are a few different variations of claw design available. For instance, Strike King’s Rage Tail craw offers the company’s patented thick, heavy design that quakes in the water, while Bass Pro Shops’ craw possesses longer, two-pronged claws that are more waft than noise. Choosing which style will depend heavily on what the fish are looking for when crawfish are in season.

Lastly, you have the craw’s head, which can possess any number of additional features. Some have textured eyes while others have long, slender antennae that add more action to the bait. As with anything else, which one you’ll have luck with will depend on what the fish want on a given day, though.

If you’ve been wondering whether or not craws are something you need to pick up for your tackle box, stop it. Go get some and tie them on. They’re deadly around structure and in vegetation, where a subtle meticulous presentation is called for, and they offer a versatility that not a lot of other baits can.