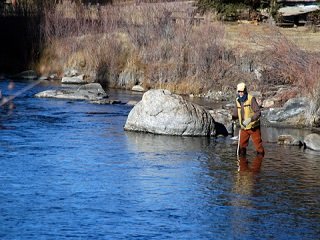 Wow. November is this Friday! Where did the fall go? In many parts of the country, bass anglers are storing their gear and preparing their boats for the winter. However, fly anglers seeking trout know that the arrival of colder weather brings the onset of prime trout fishing. To capitalize on the active behavior of these cold water fish, though, you’ll want to be sure to use the most efficient flies for the season. Throughout my years as a fishing associate, as well as a writer for Live Outdoors, I’ve had some great conversations and learned a lot from seasoned anglers, and today, I’ve provided you with a list of some of the best flies for winter trout fishing, according to some of my old coworkers, who collectively have over 100 years of fly fishing experience.

Fly anglers I’ve spoken with agree that this version is far more effective than the American version, which tends to be bulkier, for imitating the slim Blue-Winged-Olive mayflies and small brown stoneflies that are common in winter.

This guy mimics the tiny midge pupae that hatch all winter long, particularly in western tailwaters. You can fish this one in the surface film for risers, but it tends to be more effective when fished deep, with Sink Putty on the leader.

In spring creeks and tailwaters that contain scuds—tiny freshwater crustaceans—this fly is your go-to.

Small stoneflies often hatch during the winter, so the nymphs will be active in cold waters.

In red and tan colors, this fly imitates worms that get washed away when water rises slightly during dam releases on tailwaters.

This fly is so named because it’s a floating midge pupa pattern that you can spot on the water, due to its orange parachute post.

The Griffith’s is a great fly to use when adult midges move along the water’s surface, especially when they congregate and form clumps.

This fly is a common favorite among fly anglers.

This is one of the favorite streamers among the fly anglers I used to work with, due to its effectiveness in tailwaters, where light-colored shad and alewives get washed through turbines.

This small, dark fly creates a lot of action, even in small currents, which is important when you’re fishing slow, still winter waters. Its coloration is a perfect imitation of the sculpin, a small baitfish common in freestone streams.

Well, there you have it. A few winter fly recommendations from some of the most knowledgeable and experienced fly fishermen I know. If you’re looking for ammo for your trips to the river this winter, then I’d tie on a few of the flies listed above.

SHARE
TWEET
previous articleKeeping Up the Resale Value of Your Toys
next articleIs Your Bike Trail-Ready? Part One
Overture-undertone navbar fix
Monitoring string
monitoring_string = "68ec033d54c4f3b1ca4aca7f4c1e01ca"
a