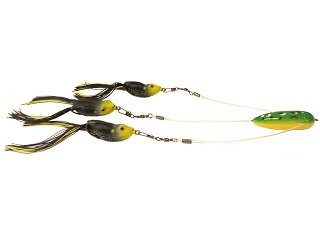 2013 saw quite a few bass lures hit the market. As with all fishing tackle, however, some of them were good and some of them weren’t. How do you know which ones hold up on the water, though? Well, today we’ll take a look at some of 2013’s best and worst lures, in order to help your decision-making process a little easier the next time you head out to restock the tackle box.

Beginning with a not so good lure, let’s take a look at an attempt at innovation from an emerging lure company with Uncle Wesley’s minnow. The innovation in this tadpole-like bait stems from the adjustable bill that can be set to three different positions. While the idea is great, the action of this lure isn’t. Consumers complained about a complete lack of attraction and movement in the bait, which led to zero fish.

Verdict: Not worth the $10, but stick around to see if the company perfects the design in the future.

When it comes to soft plastic worms, it’s difficult to bring anything new to the table. However, Sebile, a company well-known for hard baits, introduced the AT worm offered something new. The five-inch worm has multiple hook slots in its body, which are meant to offer rig options depending on what kind of presentation you’re seeking. The worm also has a hollow body and a V-shaped head to create more of an erratic action.

Verdict: While it’s a solid worm, there isn’t much here to distinguish it from similar products on the market.

Jigs can sometimes be a tricky lure to use. There are times when you want a delicate approach, whereas in other instances you want to create a lot of noise. The Chain Gang Crazy Leg jig aims for the latter presentation with the addition of multiple strands of bead chains that flow within its skirt. The chains create more noise, which can be helpful in some situations, but in others, they actually can repel fish and snag on weeds.

Verdict: While innovative, the jig doesn’t really do much more than others with noise-making features.

Rounding things out for today is one of the most…interesting lures of 2013. Castaic’s Frog Brigade aimed to combine the rising popularity of umbrella bait systems with topwater action. To be honest, there’s not really anything wrong with the design of the bait, but if multiple fish strike it, you’ll have a nearly impossible time of pulling them from weeds or pads. Furthermore, casting the rig will be a test in itself.

Verdict: While creative, the Frog Brigade’s bulky, heavy design makes it hard to cast and pull fish from cover. Only die-hard umbrella rig fans are likely to pick this one up.

The lures mentioned and detailed today are some of the more less-desirable of 2013. Be sure to return for a closer look at the year’s better options for pulling bass from the water this season!