Mono or Braid for Sharks From Shore? 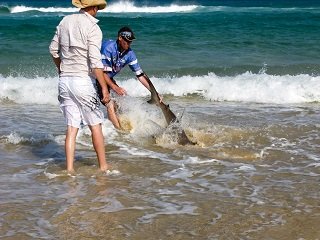 Shorefishing can be a great way to enjoy some time at the beach. Shore anglers can enjoy the sun and the cooling surf, all the while fishing for a variety of species, some of which can put up quite a fight. One such species is sharks, which are commonly targeted along the stretches of sand. Sharks aren’t slouches, however, and you’ll need some strong line to pull them to shore. What type of line to use, though—mono or braid? Today we’ll explore these options.

There are a few factors to consider when you’re targeting sharks, such as location, the size of the sharks you hope to catch, and even what reel you’re using. For example, the sharks in a given region might be larger or smaller than in other areas, which will play a role in your required line strength. Obviously, sharks will require large line capacity from your reel, as well as a strong drag system, so make sure you’re well equipped.

Let’s start with mono. There are many anglers who prefer mono due to its stretch. For smaller sharks (up to 50 pounds or so), you can get away with 17 to 20lb mono, with a 40lb leader, but if you are hoping for big sharks, it’s smart to go with 80lb mono, and be sure to have plenty spooled to handle the strong and lengthy runs that sharks are known for. With larger sharks, you’ll also want a strong steel leader in the 75lb range.

Anglers who use braid for sharks like it because of its strength and abrasion resistance, and because reels can hold more of it than mono, which offers tons of line for long runs. Even with braid, though, it would still be smart to use a good length of steel leader. While braid can hold its own against toothy fish like pike, sharks have multiple rows of teeth, which can sometimes cut even the strongest braid.

Finally, there are those anglers who combine the two, spooling several hundred yards of braid underneath their mono to take advantage of mono’s give, but also the length of braid that is useful for the long runs.

Sharks aren’t bass or even pike, though, and the dangers associated with fishing for them are not to be taken lightly. For this reason, it’s best to use strong tackle that reduces such dangers as best as possible. Like many elements of fishing, anglers are divided on whether braid or mono is optimal for shorefishing for sharks. Both offer benefits, and ultimately it is up to the individual to decide what works best.