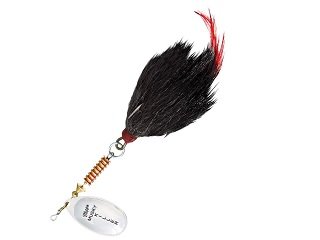 Many people think inline spinners are best reserved for trout fishing on the river, but limiting your use of the effective lures will limit your versatility on the water. Inline spinners can be used with great effect to catch many species, including musky. Today we’ll take a look at how you can use inline spinners to bring musky to the boat this season.

Early season musky fishing calls for longer casts with slow retrieves. The water will still be cool during this time, which means musky will most likely be lethargic and situate themselves in the shallows where the water is warmer. Keeping your distance is necessary as you’ll be more visible to any fish in these shallow waters and may spook them. Spinners such as the Musky Killer or Black Fury Musky Killer from Mepps will do well here. As the water gets into the six to nine-foot range, you can toss a bucktail Giant Killer, which does especially well when worked over weeds. Deeper still—over ten feet—Giant Killer inlines with a bucktail trailer, or any large marabou inline spinners, will perform well.

You’ll want to throw smaller lures during this time. Spinners in the #3 or #4 range will be your go-to options here. I’ve had great luck with silver and gold bladed Aglias, but rainbow scale blades can yield results, as well. Because most people don’t think to throw inline spinners for musky and typically downsize their spinnerbaits during the early part of the season, a small inline spinner may be the fresh approach you need to appeal to the toothy predators and offer something they don’t typically see.

Of course, with musky, you’ll need to toughen up your tackle. It’s smart to use quality lightweight leaders with ball bearing swivels. With the smaller size of inline spinners, 10 to 14-pound test line is ideal, but you can get away with heavier line later in the season with larger inlines, like Giant Killers.

Take the time to play the fish and let them wear themselves out. Yes, musky put up a heck of a fight, but if you’ve done your homework and geared up with strong tackle, you should have no problem bringing them to the boat. Remember that versatility is an integral part of fishing, and learning to use all types of lures in a variety of settings for different species will put you ahead of the curve on the water. Inline spinners can be used for more than just trout, so take the tips outlined today to heart and consider tying one on the next time you’re after musky.