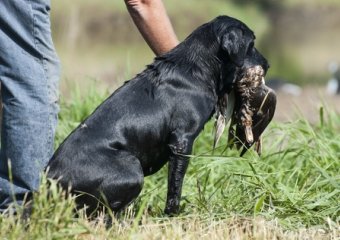 I guess it won’t be the first time I’ve stepped on a yellow jackets’ nest so I’ll come out and say something that a lot of top trainers won’t like. There is a better way to train retrievers than force fetching. It isn’t that I think force fetching a dog is overly cruel, although that argument has been heard as well. The thing is, if you put the time in and train a pup right in the first place, it isn’t necessary.

Force fetching is a biblical truth among modern retriever trainers. A finished bird dog has to deliver the bird to hand every time, right? Of course he does. So he needs to be force fetched. NO. Retriever trainers are training their pups not to bring dummies to hand and then force training them to remedy the problem. There is an easier way and it doesn’t leave the dog with the negative connection with holding a bird, dummy or other object.

Start when the pup is seven weeks old or even in pre weaning if it’s your litter. Every time you toss a pigeon or a bumper, do your best to get it back into your hand straight out of the dog’s mouth. Be creative! Dogs often drop dummies when they get back because they know the job is done. Distract the dog, run backwards if needed, hold your hand high and wave it around. Then sneak in with the other hand and get the dummy in your hand straight out of the mouth. Then love on the pup and do it again. As with all puppy training, quit while they are still having fun. Don’t fret if the dummy gets dropped a couple times. Just don’t reinforce it.

Dogs trained in this manner quickly learn that the ONLY way to bring the bird or dummy to you is to give it to you directly. Frequently, eight week old dogs will deliver to hand almost every time. As the dog grows older, they learn to succeed from the beginning instead of a year of doing it wrong and then switching to FORCE. Delivery to hand and sitting to deliver become easy once the dog has been tricked to believe it’s the only acceptable way. Dogs eventually show the same enthusiasm to grab the dummy and hold it on command that force trained dogs get. Actually, it comes much sooner and at less cost in enthusiasm and love for the trainer, the bird and dummy.