An Old Face in the Woods Again 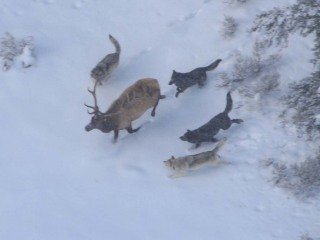 Love it or hate it, there’s an old adversary back in the woods again and I don’t mean that in a bad way. The reintroduction of wolves into the northwestern U.S. has been a hot button issue the last several years. Ranchers have protested vocally as have wolf advocates. Both sides are entrenched and emotionally stating their case. In frontier times the wolves were considered competition and sought after for their pelts. Once settlements were established, ranchers and eventually government agents hunted, trapped and poisoned the wolves to extinction.

Many outdoorsmen are fiercely opposed to the wolves mainly because they kill elk and deer. Wolves are in fact a very deadly predator and do take a substantial toll on wildlife. So do hunters in areas that are easily accessed. Most hunters fear that hunting opportunities will be lost or reduced to compensate for the losses caused by wolves. Of course there will be some affect on hunting in certain areas.

To me the bigger question is; “Do wolves have a right to exist as a species in their traditional habitat?” On the surface this question deserves a resounding YES.  When viewed through the lenses of the Endangered Species Act the question again gets a resounding YES. As with most simple questions, however, the answer isn’t always as simple. As a hunter with conservationist leanings I still have to give some weight to the land owners and even to our antecedents who consciously chose to exterminate the wolves. Wolves are the real deal as a predator and given a fair shake, they can outcompete our efforts at hunting and agriculture. Letting wolves repopulate rangeland isn’t a decision to be taken lightly.

My selfish interests as a hunter and my naturalist leanings clash on the issue of wolves. To me wolves have a right to exist as a species. We fought, worked and made hard choices to bring the bald eagles and the pintail back to good population levels. On the other hand, letting wolves range uncontrolled across the ranch lands full of cattle and decimate game populations doesn’t smack of wisdom either. In other words, as an individual I have come to about the same stalemate that the two sides of the wolf issue howl back and forth about. Perhaps there isn’t a simple solution. Sometimes in this earth the tension of two opposing views creates a workable balance. Hopefully this will prove to be one of those times.