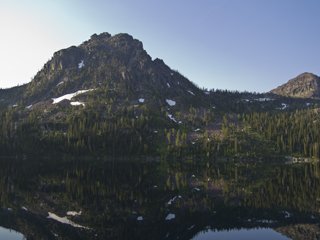 Finding a superb twenty-foot rock jump wasn’t what I’d expected to get excited about while scouting for elk in the mission mountains of Northwest Montana last weekend. But excited I got nonetheless, and was obliged to take advantage of the remarkably perfect opportunity. After drying in the late morning sun upon the lakeside slabs of rock, it was time to break camp and happily meander our way back to the parking lot. I was accompanied by born-and-raised Montanan Dylan, and my good friend Matt, a Midwest native like myself. It was Matt’s birthday, September 11th, and to take a break from the typical media fanfare surrounding the infamous date, he and Dylan decided to follow me into the mountains for the weekend to scout for elk sign.

Having just moved to Montana late this summer, I missed this year’s big-game tag application deadlines. Though with pleasant weather still lingering and the opportunity to pattern elk with the presence of archery hunters on public lands, I decided that it would be good to get my boots on the ground early and get some valuable reconnaissance in advance of next year’s season. So the three of us hit the trail with eyes peeled for elk sign.

After nearly seven miles of trail had passed underfoot on day one, we came upon our first watering hole. Arriving to the ten-acre lake in late morning, I didn’t expect to see any lingering activity, but any hopes I had were dashed rather quickly as I saw two heads bobbing toward us just above the bank-side alders. Toting bows and well-worn external framed packs, the pair of hunters stopped in the trail for a short chat. Having exchanged bugles un-fruitfully with a bull the previous evening and spotting intermittent sign throughout the area in previous days, they had been optimistic at crossing paths with a transient heard. But their pack animal support for a kill extraction was leaving the area and with no animal sightings they were forced to end their hunt.

We saw sparse sign around the next lake up the canyon that appeared to have been a few days old. Just a few narrow tracks in the moist soil near a marshy area and another glade up the trail with somewhat dispersed pellets pointed at both ends indicated the presence of a few cow elk. But  no 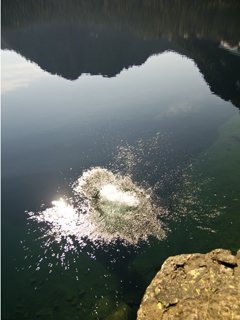 heavily used game trails stuck out from the hillsides, nor did I see any obvious sign of heavy browsing. And certainly, there were no wide prints, or asymmetrical droppings to indicate a bull had been hanging around.

Moving further up the trail and between the trading of wilderness stories, answering life’s big questions and the occasional stop to glass the hillsides and canyon floor as we gained elevation I made sure to keep my eyes peeled trail-side for scrapes and more sign. Disappointingly nothing caught the eye. As the day wore on, I questioned my canyon choice and maligned each more difficult passing mile. But as we approached our night’s camp atop a perfect slab of rock jutting out into a huge cirque-hugged glacial lake, I was reminded why I was always attracted to hunting in the first place.

If meat in the freezer was my only motivation for hunting, I would’ve saved myself the frustrations and taken up ranching or ordered my frozen beef tenderloin from the Schwan truck years ago. It is, after all, the hunt itself that is the joy and the satisfaction. It’s arriving at the top of a steep trail and being smacked in the face with the beauty of the mountains that makes it worth the hike. It’s about realizing that even on the days when I feel lucky for having potted a squirrel, I could have been in the office spotting decimal errors. It’s the experience and the satisfaction of pursuing God’s game on his beautiful turf that keeps me coming back. And although I knew that I’d come up empty handed on finding the home range of an elk heard in that particular canyon, when a satisfying plunge rung out across the lake and the ice cold water took my breath away I realized I’d never been happier about “failing” in my life.