Play the Odds for a Trophy Pronghorn 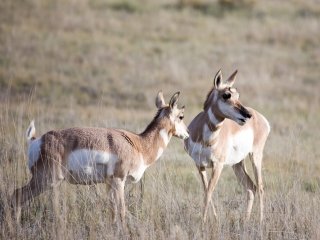 The western part of the United States is home to one of the most unique and easily obtainable big game animals in the hunting world, the Pronghorn.  This slightly smaller than a deer, sized animal is nature’s version of a tasty freak show and bagging one is rewardingly worth the effort. Pronghorn have been traditionally undervalued as a trophy animal, but due to their growing popularity and affordability, they are making a major move up the trophy room status ladder. Although their range consists of 16 states, Canada and Mexico, here are some general tips that will take most of the gambling out of your own hunt, and put the odds in your favor.

The Pronghorn are so peculiar that they have several nicknames. It has been called the Speed Goat, Sage Goat, Sagebrush Rocket, Prairie Ghost, Desert Racer, and Goat-a-lope.  This grazer and browser turns sagebrush into rocket fuel, as it is the second fastest land animal in the world. Second only to the Cheetah, it can run an estimated 55 miles per hour. It is the sole existing member of its own species, Antilocapra Americana. Like many horned animals, the males have a growing horn sheath that sits atop a horn core, but unlike all other horned animals, the Pronghorn males shed their sheaths and re-grow them annually.

When deciding where to hunt them, let the math decide for you. There are an estimated one million Pronghorns in the United States, yet more than half of them live in the state of Wyoming. It goes without saying that since the Cowboy State contains half a million of these speedsters, it is a safe bet destination.

Pinpointing a Wyoming area to hunt in should not be a great mystery either. There are thousands of square miles that are open to public hunting that consist of federal and state land. Just in BLM (Bureau of Land Management) land alone, there are an estimated 18 million acres. I have spent two weeks on some of this land and out of 12 days in the field, I ran into only two other hunting parties. This true western state is expansive, and it is a do-it-yourselfer’s paradise.

But what if you want to improve your chances even more with a private land hunt, but you don’t want to pay for a guided or semi-guided hunt? Wyoming can make this happen too. The Wyoming Game & Fish Department provides the public with lists of landowners, by region, who offer trespass fee hunts. These types of hunts allow a hunter to pay the landowner a fee to gain access to their privately owned land.  The range of trespass fees are anywhere from $50.00 up to $2000.00, with the average around $350.00.

If you are into hunting for more than one animal, you can also get Pronghorn doe tags for most hunting areas. The deadline for applying for all Pronghorn tags in Wyoming is around March 15, but there are later opportunities to purchase left-over tags that were either not claimed or not applied for.

There is one more little-advertised fact that ups the ante while hunting for Pronghorn. Once you have them located, and if you have a flat-shooting rifle, hunting them can often be painless and uncomplicated. Much like trophy Whitetail bucks, Pronghorn bucks also have a relatively small home range, and if spooked and not pursued, they won’t run to far from home.  It is not uncommon to get second and third chances on a blown-out buck.

With proper planning, you can harvest some Wyoming fast food and overcome most risks that are oftentimes associated with many big game hunts.  This American original is worthy of your pursuits, and five out of five taxidermists recommend that you go Pronghorn hunting.