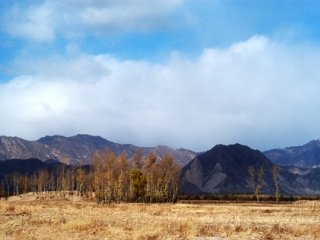 I read an article today about a guy who was accidentally shot in the hind-end by his hunting dog. Apparently the dog stepped on the gun that went off as the guy was messing around with some decoys in the water. I have many questions (like what kind of food he’d been feeding his dog? Maybe he should consider going for the premium stuff, the poor pup clearly has a bone to pick)but the guy will be fine; he was wearing waders at the time.

It got me thinking about all the injuries and close calls that I’ve had while in the outdoors. I’ve had many while kayaking or rock climbing, but just a handful while hunting and shooting; most of those were in the company of my hunting buddy Andrew.

One year, when we were about 19 years old, Andrew and I were building a floating duck blind in my parent’s driveway. Never mind the fact that we miscalculated a few things and ended up with a blind that had a roof nearly 7 foot tall and pitched at a 60 degree angle…we almost killed one another making this thing. Twice.

The first injury came during principal construction. Because of some other miscalculations, we ended up about an inch short of connecting a 2×4 to the main corner stud. Rather than re-cut a board, we decided to just sort of force it over there and screw it into place. We drilled a pilot hole, and then re-chucked the drill with a phillips screw bit with which to screw the whole thing together. Both of us lined up on either side of where the joint would be. We pushed this, pulled that and leveraged off of a tree to join the boards together snugly. Drill in his right hand, the left pulling hard on the main corner stud, Andrew began to quickly put the screw in place. No sooner did the high-pitched whirring of the drill begin than it quickly stopped again as the drill fell to the ground. Andrew cursed loudly as he clutched his left wrist and stumbled about. Confused and concerned, I asked him what had happened.

“I drilled a hole in my damned wrist!” he shouted.

The phillips bit had slipped off the head of the screw and punctured directly into his wrist.

After I got him to sit down, I called my neighbor and Illinois State Trooper to come assess the situation. There was very little blood, and despite the obvious pain and strange 1/4” hole in Andrew’s arm everything seemed satisfactory. No veins had been hit and his tendons had somehow separated just enough to allow the bit to enter and exit without serious injury. It was just a flesh wound. He got lucky.

A week or so later, with a nice scab on his wrist to show for the incident, Andrew and I launched the blind in a chute between the Illinois bank and an island in the Mississippi. We solicited the help of his younger brother Sam and figured the three of us would have no problem setting the anchors to keep the blind in place.

Once we got to the site, the current was a little faster than we’d anticipated and we encountered issues navigating the blind into position and keeping it in place long enough to anchor it off. With a depth of over twenty feet on one side of the island, we were also having issues with exact placement of some anchors (cinder blocks with insulated Romex house wiring for a tether) in relation to the others. After some clearly deficient critical thinking we determined that the best course of action would be for Andrew and I to place the anchors  precisely where we wanted them in relation to the blind…while swimming in the water. We tethered the boat to shore and let it drift down stream several feet with the current. Sam would remain in the boat while Andrew and I floated into position with life jackets; once in position, Sam would hand the anchor down to us and we’d swim the concrete block precisely into place.

I probably don’t need to relay in detail the events that followed, but suffice it to say that after a few moments of becoming dangerously entangled in the tether, and over garbled attempts to coordinate directions while drinking half of the Mississippi we finally managed to communicate to one another that letting go of the block was probably in our best interests. Do not swim with cinder blocks, lesson learned.

We got one whole season out of that blind before the spring floods washed the whole mangled mess towards the gulf. Andrew’s opinion definitely differed, but for years I contended that season was worth the risks to life and limb.

I turn 30 in just over a month and now as I write this I can’t imagine what we could have possibly be thinking. But what doesn’t kill us in our youth definitely makes for great (or at least ridiculous) stories when we’re old enough for hindsight and cowardice. I didn’t catch the age of the guy who’s dog shot him, but I hope he’s young enough to appreciate it all in a few years, or old enough to have thick skin for taking the inevitable ridicule from his hunting buddies…and their dogs.