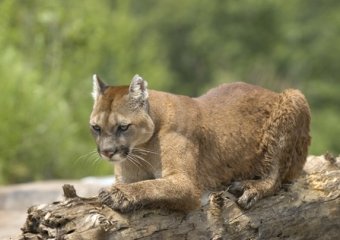 Big predators have a way of capturing our imaginations. Especially in areas where coyotes pass as dangers in the night, the prospect of transient big cats or even a wandering black bear can cause quite a stir amongst the locals. My hometown in west-central Illinois has been teetering on the edge of cougar-fever for a few years now; this fall they finally got their wish.

For more than a decade, westcentral Illinois and northeast Missouri have been steadily peppered with anecdotal reports of cougar sightings. The occasional blurry photographs, unsteady and out of focus home videos and a smattering of track-casts invariably end up on the local news just hours before official statements from FWP or state DNR offices dismiss them as just another case of bobcat (or worse, house-cat) misidentification. Until recently, the  Illinois Department of Natural Resources refused to acknowledge that even transient lions may use the densely forested southern counties, much less entertain the idea of a breeding population in the state.

All the while, anecdotal reports of cat sightings have filtered through local communities, families and neighbors; the outright dismissal of these reports by state agencies has facilitated an air of mistrust for state resource agencies in many areas. With family and friends on both sides of the Mississippi, I’ve personally been regaled by no less than four first-hand accounts of cougar sightings in the area. In one such account, my neighborhood mail carrier described sitting in a lion-jam just outside of town with four other cars pulled over to watch an adult cougar frolic in the snow in an adjacent corn field. With recent confirmed lion kills and verified sightings in surrounding states, the Mid-Mississippi valley has been anxious for official confirmation of cougar habitation for quite some time. In October, we finally got it. Almost.

Local media headlines exploded with the words “Cougar” and “Attack” in the boldest of letters, downplaying other appropriate words like “alleged” and “unconfirmed.” On the evening news, 14 year old Jeremiah Dice showed off his tattered camouflage hat and shirt while describing the heroic battle he had with a big cat. Having allegedly defended himself with a pocket knife and his bare hands, he was able to fend off the feline and escape with only minor injuries and shredded clothing. Having been bow hunting by himself on the family farm, there were no eye witnesses to corroborate his claims. And, perhaps most interestingly, no exchange of DNA between he and the cat despite such a close quarters encounter.

As I had initially predicted to friends and family upon reading the story, just a week later the boy issued a public statement along with his father to confess the elaborate scenario as a hoax. When prodded about the motives behind the farce, Jeremiah admitted that he had accidentally fallen from his tree stand and made a small tear in his shirt while also sustaining some minor injuries. Hilariously, he admits to concocting the story out of fear that his fall would earn him the punishment of not being allowed to hunt alone anymore. As if a man-eating cougar roaming the country-side wouldn’t have precipitated a similar response.

I don’t mean to poke fun at the boy, or his tall tale; kids will be kids. As usual, a lot of criticism could be handed out for how the media handled the debacle too; but I am most interested in how the IL-DNR will handle future sightings. And, given the incredible hype surrounding this one transparently obvious hoax, how state agencies will choose interact with the public if and when confirmation is made. But until then, I’ll enjoy my privileged (and contrived) status among friends as Western Liaison for Illinois Cougar Affairs and smile as I send home photos of the ubiquitous Montana mountain-lions as they are spotted just out my back door.