Do It Yourself: Blacktail Deer 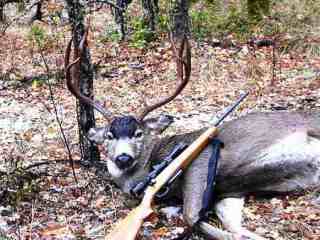 Many articles, books, and videos have been produced in the spirit of helping hunters get closer to realizing their dreams of killing a nice Columbian Blacktail deer, but very few have actually given good hunting locations.

This article will not only tell you where to go, but it will also tell you when and how.  The rest is up to you, and although no hunting is guaranteed, I am sure that anyone would find success by following these simple guidelines.

Timing is everything and this definitely applies to Blacktail hunting. A trophy Blacktail is a very hard animal to find, let alone kill, so you are going to have to hunt in a location that allows the hunting of

bucks as close to the rut as possible.  Although California and Washington State offer good Blacktail hunting, I believe Oregon has the most user-friendly general rifle season.

You will need to check the regulations (http://www.dfw.state.or.us/) for season dates, but you should just plan on ignoring the beginning of the season and plan on the last week of the general rifle season. The opening day for the Oregon general rifle deer season usually starts in late September or early October. This time of the year is just too hot and the rut is still weeks away. The last week of the season usually runs into the beginning of November and that means love sick bucks are starting to act dumb.

Now that we have Oregon narrowed down as the destination state, it’s time to figure out a way to get to the hunting area if you are flying to Oregon from out of state.  It is easier than you can imagine. Simply fly into Portland, Oregon and rent an SUV. The hunting locations I will be divulging do not require any serious off-road navigation, and you should have nice graveled roads every place you explore, so an average SUV should do easily do the trick.

I once met a couple of guys out hunting who literally just flew into Portland, Oregon, rented an SUV and went hunting for Blacktail bucks. They had done no homework, scouting, or research, so when they ran across me and my hunting companion and begged us for a place to go, we rewarded their boldness and offered up a couple hunting locations. I was astounded that those two guys completely went against conventional wisdom with no hunt planning, but I also admired them for it

Our hunting areas are actually closer to Eugene, Oregon, but I think it would be easier and cheaper to just drive from Portland, than to buy an extra leg of plane tickets to get into the Eugene/Springfield area.  Where to hunt? I am giving two areas to hunt, and they are both different from each other as far as foliage and terrain goes. Both areas will be reached by leaving Portland and heading south on Interstate five (I-5).

The first is in the region four area of the Umpqua National Forest. You will have to look it up and get maps, but basically you will be turning east off of I-5 in the Myrtle Creek area and driving on HWY 227. If you look at a map, you will see how easy it is.  The Umpqua National Forest has nice rolling hills with a lot of oak flats. You can easily spot deer from the road, or choose to walk ridges in some good oak tree areas. The acorns provide months worth of food and will hold deer all season. This is easy hunting country and you just need to put in a couple of days to figure it out.

The seconds and alternate location is on the opposite side of I-5. It is an area owned by a private timber company called Weyerhaeuser, and is located in Coos County, Oregon. The property you will be hunting is called the Millicoma Tree Farm. You can get there several different ways from I-5, so check out a map and contact them, or visit their website (http://www.weyerhaeuser.com) and look under the recreational information. This area is a lot different than the national forest destination as it is actual timber company-owned land which is often logged. There are numerous clear cuts and young forest areas with new trees called ‘reprod.’ It holds tons of deer and there is plenty of room for all.  It is an unbelievable place and you can figure out how to best hunt it in short time. Another bonus for both of these areas is that you can purchase an over the counter bear tag and make it a combo hunt.

If someone puts in a good week of hunting at these two locations, and hunts it during the last week of the season, I would be very surprised if they were not successful.  Be bold and give it a try.