Secret Complaints by Taxidermists About Customers 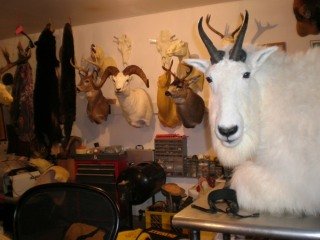 With reality TV shows being all the rage these days, I think it is time for a reality magazine article.  Although I cannot create the atmosphere of a bunch of taxidermists huddled inside of a darkly lit shop, I can offer you the words which are spoken in that shop, with hushed tones and the darting glances of paranoia.

One of the first rules of professionalism is to never, ever get caught complaining about your customer base, especially in front of your customer base.  However, one of the first rules of writing is to write about facts and interesting subject matter.  Having been a taxidermist for almost twenty years, and after hanging around other taxidermists for even longer, I have compiled a list of industry-related complaints that are common, but never spoken about outside the taxidermy inner circle.

Time is money in any business, so any unnecessary time spent with customers is theoretically costing the taxidermist money.  Usually the complaint goes like this, “A customer took an hour to tell me his hunting story.” Honestly, taxidermists don’t mind sharing your excitement of the hunt with you, but the inside joke is that there are only three hunting stores. Story number one is always someone stumbled on a trophy with little effort and great luck. Story number two involves a trophy that should have been shot by a buddy, but something quirky happened and the client shot it instead. Hunting story number three is the best one as it includes a client hunting super hard and was rewarded with the trophy that he or she had hunted for “years” before fatefully making it happen.

“The guy butchered the cape.” This one is self explanatory.  It means the client not only cut a cape wrong, but when they actually did cut it correctly in some spots, the seam looks like a jigsaw cut it.

Everyone should know that nice evenly cut seams look better and show that someone cared about what they are doing.

“The client salted the cape wrongly.”  Some people have heard about salting capes or hides at one time, but salt is the worst thing you can do if the skin has not been properly turned and fleshed. If there is meat of any kind on skin, salt will only lock it into the skin making it impossible to properly flesh later. Find out what “turn and flesh” means and NEVER salt anything unless you know what you are doing.

“The client had a size issue.”  This is a classic and historical complaint made by uneducated customers that are mostly directed at fish and deer shoulder mounts. The complaint is always worded the exact same way, “I thought my deer’s neck was bigger than the mount you did for me,” or “My fish was a lot bigger/longer/thicker than the one you mounted for me.” The real deal is that when we are away from our trophies, they all grow just a little bit in our minds. For deer, most photos are of a dead deer that are relaxed and limp in death. It is not standing and holding its head and neck up, which is what mounts simulate. A live deer is not bunched up and burly like a dead deer in a photo. Its head and neck are extended as in real life.

“Some client actually asked me for a discount while promising to bring me tons of work.” Discounts are a dirty word in taxidermy, and they almost never really exist.  Mounting any animal is the same amount of work no matter how you slice it, so offering a discount amounts to a taxidermist offering to do the same amount of work for less money.  Most people would not get up and go to work and agree to work for less money just because their bosses asked them to. Work is work and everyone needs to get paid for it.  Also, promising a taxidermist to bring him a lot of work later for a discount right now is not good business. Anything can happen and a client cannot guarantee future business, regardless of promises.  Don’t ask for a discount.

“I had a price shopper call today.” There is no more dreaded call than to have someone call and simply ask, “How much for a deer mount?” You should be picking your taxidermist on merit, not price.  A good taxidermist not only attempts to price his work fairly, but spends a lot of time and money keeping current on latest techniques and technologies. They also try to better themselves and improve their skills, so when someone calls and simply asks for the price, it cheapens all the hard work a taxidermist has completed to try to earn customers with good craftsmanship and skills.

Here are some of the costs associated with doing a shoulder deer mount.  Labor time spent speaking with customer, turning, fleshing salting, trimming, cleaning, mounting sewing, finishing, painting, fitting and installing antlers on the form, and miscellaneous other tasks. Then there are tanning costs, deer form price, salt, thread, glass eyes, hide paste, staples, ear glue, ear liners, mache, hangers, wear and tear on tools, electricity to run tools, freezers, compressors, etc. All these costs are going up every single day due to the poor economy and high fuel prices, so please consider these before you ask for a discount.   Once all materials the materials and time are added up, a taxidermist is not getting rich.