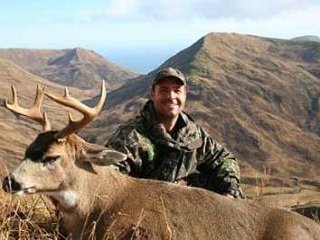 Kodiak, Alaska(2002)-Bud Bradshaw began to strain as his 81-year old body struggled to control the eighty pound Halibut that was thrashing several feet below the water’s surface. Earlier in the morning, he had already shot, dragged, gutted, and skinned a Sitka Blacktail buck, and now he was locked in battle with perhaps the best tasting fish in the Pacific Ocean. “What a day,” he happily blurted as he smiled at me. What he really meant was what a special day this was and how lucky we both were to share it with each other.

Sixty years earlier, Bradshaw was serving as a tank driver in Europe during World War II. He had enlisted in the Army to not only serve his country, but to have a steady job. He grew up and lived on the humble but rich farm lands of central Illinois. He fished, trapped and hunted the waters and bottoms of the Mississippi River, and he never had any dreams other than having a family and having his own farm. Back then recreation was considered a frivolous luxury that only other people could afford.

During the war, Bradshaw had spent plenty of time on notorious battlefields.  During the terrors and lulls of the war, he began to entertain thoughts of one day seeing Alaska. He thought he might want to do some fishing ‘up there ‘and maybe even some hunting if he was lucky. He knew that he would be married as soon as the war ended, and felt guilty for having a desire to travel somewhere to recreate, but his desires began to turn into dreams. It was his first dream that consisted of anything outside the little box that he had lived in his entire life, but war changes people and he was no exception.

As the war ended, Bradshaw was married. He and he and his bride began their lives in a common predicament during that period of time; poor. His Alaska dreams were placed in the back of his mind with certain war memories that he had no current use for.

He opened up a garage and chose to make his living as a mechanic. Years turned into other years, and decades began to measure time. Eventually, the humble man from the humble place was retiring. As he realized that his life had served its purpose, his dream was taken off life support and it began to have life. He found a phone number of an Alaska guide who would offer to take him hunting and fishing. It happened just like that, and here he was, pulling in his first and only Halibut on the second day of his dream.

Kodiak Island is one of Alaska’s best kept secrets, and offers numerous big game animals and varieties of fish for thousands of outdoorsmen to seek each year. I was lucky enough to accompany Bradshaw on his dream. He was my great uncle, but he served as my grandpa and my mentor and I was enjoying his dream way more than he was at the time. That Halibut eventually made it into the boat, and the deer steaks made it into our bellies.

We relived that trip many times before he passed away in 2005.  I always wonder how many people today might have that dream, and I also wish that I could encourage them to make it happen no matter what the cost.  I hope they are lucky enough to be able to say, “What a day!”

For information on opportunities on and around Kodiak Island, Alaska, visit www.kodiakcombos.com