Stare of the Cougar 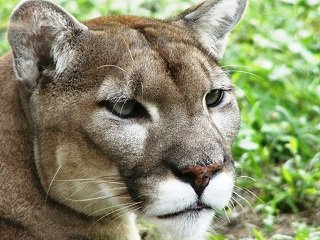 Somewhere in eastern Washington during the winter of 1996, a good friend of mine took me along on a week-long hound hunt for mountain lions.  Being a taxidermist I had seen plenty of the big cats up close and personal, so although I was excited about the hunt itself, I did not hold cougars in any higher esteem than any other trophy animals. Sure, they were majestic in their own right, and of course they were a beautiful animal in photos and videos that I had seen, but to me a dead one on  a table or in the back of a pick-up was worthy of only momentary admiration.  However, by the end of that week, I would hold a completely different opinion about cougars and even though it is now sixteen years later, one particular cat still haunts and fascinates me.

Anyone who uses hounds for cat hunting knows that fresh snow is the difference maker between a bad hunt and a good hunt.  During our week of hunting, we had no fresh snow so we ground out an unfruitful four days of hunting.  On the fifth day of our hunt, the white stuff showed up and started piling up. We drove about an hour’s worth of roads when the strike dog started barking while riding on the hood of our truck. We got out, and sure enough, a cougar had just crossed the road and we were staring at its crispy fresh tracks. My buddy informed me that it was a either an average sized male or a large female. I was willing to kill an average sized tom, so we made the decision to go for it.

As he let the hounds go, they exploded in fits of excitement that were as different as their different personalities. We stood by the truck waiting for their howls to dissipate over some unseen ridge of hill before taking off after them. I was already geared up when the lead dog signaled that he had treed the cat.  My adrenaline was loosed, and it began to flow through my body. I suddenly realized that I was possibly going to get to see a live cougar in the wild. Most people never get to experience that so I tried to drink in the moment. I tried even harder to remember to savor it when it happened.

I wish I had a story about how hard it was to arrive at that treed cougar, but it only took us an hour to find the chaotic yapping of the excited dogs.  My buddy had seen plenty of big cats in trees, so he wasn’t showing any extraordinary emotions.  I was winded from knee deep snow, so I was just loitering until I caught my breath. I had not looked up into the trees yet.

I was carrying a .270 rifle with open sights with me, and my friend told me where to stand for the best view where I could get a clean shot. I still had not looked up yet.

I found my wind, loaded the rifle, and began to scan the trees for my cougar. My friend told me to not hurry, so I didn’t. I did not see the cat, so I looked at the dogs to see where they were looking, and I concentrated on their sight path. I was somewhat relaxed, but not at all ready for what I was about to experience. As my eyes darted around each limb in the one hundred foot tall Ponderosa Pine tree something that did not quite belong caught my eye.

One second of my life I was just a hunter on a hunt, but as I locked eyes with a 130 female cougar, that second seemed like a hundred years ago. I was looking at both a monster and a ghost. As we intensely exchanged stares, we both knew that neither one of us was supposed to be staring at each other in this moment of time. Its eyes were like cold, calculating lasers and they bore into me so deeply that to this day I cannot properly articulate what it felt like.  It might as well been Bigfoot or a space alien because even though it was a known animal, it was so unique and so unnatural that I could barely process it in my mind.

This lasted for what seemed like hours, but eventually the cat began to scan the dogs and my hunting partner, and then her eyes would wander back to mine. As she began to let stress change her disposition, our moment was soon over. It did not matter though. Those two or three minutes that we had with each other will last me a lifetime.

Skyrocketing prices will keep everyone but the diehards from pursuing a cougar hunt, but if you think that you might like to experience a hunt for a giant cat, book it now.  The stare from such a majestic animal is worth it and you will experience feelings that cannot be felt on any other hunts.