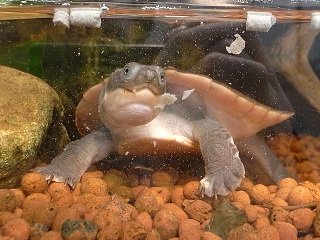 Strange hunting stories have been told around campfires for thousands of years, and today is no exception. The animals we hunt are tough creatures and they deal with discomfort and pain that we can never imagine. As a taxidermist, I have also seen many strange and unique things while skinning thousands of animals. I have seen evidence of illness and injury and I have also found foreign objects such as hundreds of bullets. All taxidermists have their own stories, but here are a few mine.

One spring day when I was stationed at Ft. Sill, Oklahoma while serving in the U.S. Army, I visited the base game biologists at their office.  They had a live Snapping Turtle that was ancient. It was a sight to behold to see such a large and old specimen. The shell must have been 24 inches long and I have never seen one as large as that one my entire life, but it had another feature that made it even more interesting. For those of you who don’t know, Oklahoma has been home to Native Americans for centuries. So, it was really no surprise to see ancient arrowheads embedded in the shell of that turtle. One can only guess how long that creature carried around those embedded and broken off stone tips, but it was something I will never forget.

Around the fall of 2008, I was removing an elk cape from its head when I ran across a steel nail with its tip embedded in the elk’s vertebrae.  How did it get there? Another time while skinning out a bear’s head, I found a single, lone tooth growing on the outside of the bear’s lower lip. At first I thought it had maybe broken off and skin just grew around it, but I was wrong. It had a root system and was growing independently of the bear’s mouth and jaw system. Very weird.

A few years earlier, I ran across a large microchip embedded in the neck of a Black Bear. I figured it was something the Oregon fish and game guys had installed so I thought nothing of it.  When I tried to give it to a local biologist, he was puzzled. He told me that it was way too large to be one of theirs, and he had no idea who would have installed that inside of any animal as it was very large. I gave it to him to check out, but he never got back to me.

The strangest item I ever found inside of an animal while skinning happened while handling a Whitetail deer in Illinois. As I removed the head from the body, I noticed something orange was stopping my knife (when removing heads, I only use a knife as there is no reason to use a saw or an axe since a knife will easily do the trick.) As I investigated the orange item, I discovered that it was a full section of orange track from a Hotwheel set. The piece must have been 32 inches long. Somehow the deer had swallowed the entire section of track or had it rammed down its throat. I will never figure that one out.