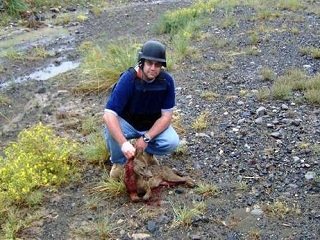 As mentioned in the previous article detailing American civilian contractors serving our troops overseas as hunters and trappers, I had the privilege to complete two tours as a Vector Control Specialist (VC) in both Iraq and Afghanistan. The VCs were a small group of pest controllers charged with managing and controlling possible disease carrying (vectors) pests. After several Golden Jackal incidents in Afghanistan, the final straw was when a jack bit a soldier. The game changed after that and I was tasked with trying to keep all jacks from entering my Forward Operating Base (FOB).

Before I could put together a management plan and discourage the jacks from wanting to enter our base, I had to get rid of a few as their numbers were too overwhelming. Alongside two military police representatives (MPs), our first night of jackal hunting was a bad comedy as we misjudged the numbers we were facing.  The next night we simply sat and watched over the garbage dump and waited until dark.

As dusk grew darker, the familiar shapes of jacks began to show themselves. They are incredibly resourceful animals and how they got through our fences so quickly was amazing, nevertheless, we had to bag a few that night to put a dent in the local population. The MPs dropped the first one right away, and we could not believe our eyes when the shooting did not scare any of the other jacks away. These animals had never been hunted and it showed. The MPs dropped another one, and another one, and this kept going on for an hour. Some poor jacks even came within three feet of our position. We felt like the first humans that had ever hunted as the animals showed no inhibitions or concern for what was happening around them. It was a figurative turkey shoot.

At the end of the night, we had over twenty Golden Jackals stacked up and ready for tissue and saliva sampling. Harvesting that many animals served two good purposes that night; the U.S. Army’s preventative medicine representatives had plenty of specimens for disease testing, and we had eliminated enough animals to have a manageable head count. We were later told that 30% of those jackals carried a strain of rabies which we were also told was an astronomical and unanticipated percentage.

Hunting and trapping for the government in a war zone was a great adventure, but it was also a way for us civilian contractors to do our small part in the war on terrorism by serving our brave and underappreciated troops.