From Rookie Hunter to “Turkey Man” 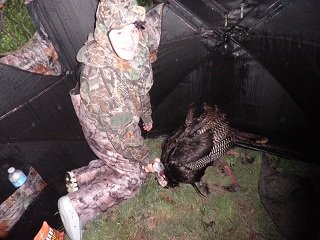 One of my recent joys has been to utilize all my turkey hunting knowledge and experience by helping my young nephew harvest his first wild turkeys and helping him get hooked on hunting.  If you ever have a chance to take a young hunter afield, I hope you will not only take advantage of the opportunity, but I hope you will cherish it forever as well.

It all started for me two years ago when I decided to take my nephew on his very first hunt after he showed an intense desire to do so. I live quite a few states away from him, so I had to make the best out of the small hunting area available to us, and I had to overcome all the obstacles of getting a first-time hunter lined up on a bird.

Regardless, we were off to turkey hunt on opening morning and little did I know how memorable that morning would be. I knew where the birds were roosting, so I had a perfect spot all picked out for our first set-up.  At first light, it seemed the entire county was blowing up with gobbles. The cacophony was so thunderous and so loud, that I started laughing. Every near-by gobble shook the air around us and it felt just like the thumping base speakers of a teenager’s new car stereo system. It was the ultimate surround sound.

After navigating through the semi-darkness and finding our first set-up spot, we settled in against a nice cedar tree and waited for prime time. The birds were shy that morning, so we decided to make a large circle and enter the timber from the opposite side of the property.

After we set up a couple of decoys on an old grass logging road and made our first call, two jakes could not help themselves and decided to kamikaze their way into our set-up to commit suicide. I steadied my nephew as he tried to steady his .20 gauge, single-shot shotgun.  For the first time in his young life, a certain tension entered our relationship, the good kind of tension.

His young mind was busy processing the situation and concentrating on the soon-to-be shot while my mind was trying to will the two birds within the magical kill zone. I was also hoping that he would follow through with his shot and not suffer the disappointment of choking on his first ever shot at a game animal.

The birds never stopped coming, so I gave him the okay to pull the trigger when ready. I might have whispered something like, “relax,” but the adrenaline blurred my memory from that day. Our tension was soon relieved by the sound of the little gun. Both birds hit the deck and I sprinted towards the one that was flopping around. He had killed a double. His first hunt ever resulted in two fine, legal jakes that will always be trophies in his eyes. The hunt was over, and the smiles began.

It would be two years later until I could get the kid in the woods again during the spring. That was this year and he had a broken foot that we had to overcome, but he passed up seven jakes to kill a really nice bird with a beautiful tail and a 10.25” beard. In three years, my young nephew had killed three toms. I enjoyed him relishing the accomplishment, and I was proud of him for making those shots.

All the guiding in the world cannot make someone follow through and deliver critical shots when they need to be made. My nephew only has those trophies to his name because he made the shots to kill them, and he deserves to feel the pride of a job well done.

One of the things that impressed me the most about my nephew the hunter was the humble manner in which he handled his success. His cousins and friends are also hunters, but so far they have not yet scored on a turkey of their own. He never boasted or rubbed in it, and he never put on any airs of superiority. However, he did adopt a subtle but permanent form of celebration that even I cannot frown at. Every time he sends someone a text message from his cell phone, it includes an electronic signature that says it all; it reads, “Turkey Man.”