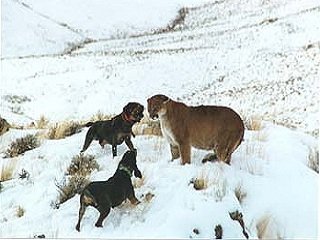 Continuing on from when I saved my own life by panicking after dangling through a hole of ice, snow, and waist-deep ice-water, my outfitter friend still had a missing hound dog somewhere in eastern Washington.

After I had saved myself from possibly drowning or hypothermia, and after a night of warming by a fire, I still had to help my outfitter friend find his missing dog. It was no coincidence that this dog was his finest lion hound, so all means and methods would be used to help find it. For some reason, the telemetry on the dog’s electronic collar was not working. Originally this was blamed on the snow storm from the previous night, but either the collar was malfunctioning or the dog was out of range.

After a week, we had traveled hundreds of miles of roads, trails, and ridges trying to get a reading on the dog’s collar but we never did.  After about eight days, my friend was forced to accept the fact that his dog had probably died somewhere. Nobody in the country had found a lost hound dog, and radio ads for a lost dog went unanswered. Not only was it time to accept the dog’s death, but a new storm had blown in and dumped another foot of snow in the area.

The dog was gone for sure. Almost two weeks after the dog went missing, my friend went out trying to find the collar so he could get closure on the whole sad episode.  Amazingly, he got a hit on his tracking equipment and he raced to the top of a high ridge to retrieve the collar, but what he found there shocked him and everyone else that he told the story to.

As he topped the ridge looking for a dog carcass and red-colored collar, he found instead, his dog curled up in a ball barely alive. Around a single tree, a circular path was worn several feet into the snow. After studying the site, my friend determined that the dog had probably treed the cougar that night and had most likely kept that cat treed for about a week. The poor dog had exhausted himself and was laying there dying.

He scooped up his dog and raced down the mountain and straight to the veterinarian’s office. They managed to save that dog’s life and he lived for a few more years.

You never know what one night of hunting might lead to.