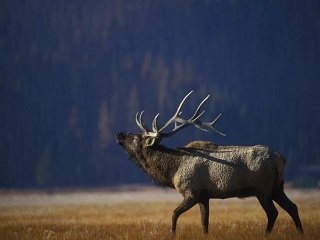 I have never hunted two animals that were so different but so much alike during mating season as Elk and Wild Turkeys.  Most hunters have heard this comparison before, but if you want to travel west and experience archery elk hunting success, think like a turkey hunter.

It is a fact that both turkeys and elk are susceptible to opposite sex mating calls right before actual mating seasons even begin.  If you remember this truth, you will find yourself attracting bull elk to your bugle and cow in estrus calls during the hot opening days of most western elk seasons.

I have spent more time hunting elk in Oregon than any other western state. It is hot there when opening day arrives, and it can often reach 100 degrees during the hottest part of the day. For this reason, I try not to hunt in the heat of the afternoon for meat recovery purposes and besides, elk are more active during the cool mornings and during the cooling of late afternoons. They will respond better to calls during these two prime times.

Traditionally, western archery elk hunters have relied on spot and stalk tactics during the opening days of the season, but the secret of aggressively calling bulls on opening week is slowly spreading. For some reason, bulls during this time are eager for the rut as they rub the velvet off their antlers and start scent checking common watering holes for hot cows.

A bull elk is as impatient as any animal I have ever hunted but they are not dumb. They will come to your calls much like a mature gobbler will mistakenly show up to calls in the hopes of breeding the first hen of the season, but they will play the wind too.  You can be bold in your calling, but don’t forget the basics.

If you find yourself hunting in the middle of the rut, then pull another turkey tactic out of your bag of tricks such as getting position in front of a traveling elk herd and calling to the lead cow. If you can mimic a calf in distress or a lost yearling, the lead cow of group of elk will often travel that direction just to satisfy her curiosity. She should be towing a group of cows and a herd bull behind her, and that is what you want.

Finally, if you are hunting the end of mating season, force a bull to answer you and pursue him just like a gobbler pacing his strutting zone. You can probe the area holding the bull and make soft cow calls to him. He might not bugle in an excited rage, but he will give himself away. This is also my favorite time to use a two-dimensional decoy like one from Montana Decoys.

Eastern hunters often get a bad rap for not knowing much about elk hunting, but if a hunter is efficient at hunting turkeys then the odds of success on your first elk hunt are better than you can imagine.