Have You Ever Been Watched? 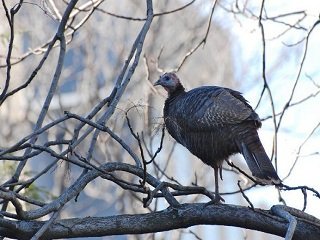 As a hunting & fishing guide and a taxidermist, I have heard my fair share of stories and tales from the outdoors, but over the years I have realized that almost all solo hunters have shared the same creepy experience; the feeling of being watched.  If you have spent much time in the outdoors, then chances are good that you have also felt that unsettling feeling that you were not alone.

One morning while hunting turkeys in the wilderness of Northwestern Washington, I had an unsettling experience that I will never be able to explain. This specific area was a favorite of mine and I knew every square inch of this land and I also knew every single turkey in this area as well.  However, on this particular morning in the middle of nowhere, I felt I was being watched by some person or animal possessing intelligence. It is a feeling that I cannot adequately articulate, but most hunters know what I am referring to. The nearby gobble of what sounded like an ancient gobbler quickly distracted me from looking around for my watcher.

The gobbling gobbler sounded so distinct and so abnormal, that I let the excitement of hearing his unique call cloud my judgment. Every turkey hunter knows when you hear a throaty gobble that sounds like marble being shaken in a metal can, it usually means an old longbeard that has outlived his glory days.

Regardless, when I heard that gobble, I forgot about being watched and I quickly crossed a large draw to close the distance on what sounded like a monster tom. As previously mentioned, I had a command of this area and I was really tuned in to it, so I should have known something was askew when I arrived within soft-calling distance to that hot gobbler and he shut up. He just turned off which was not normal.

Normally when a gobbler instantly shuts down his excited calls, he has seen an approaching hunter or been scared by a predator, but there is no way I was seen or heard. As I sat there trying to figure out what had happened, I heard the same gobble from the very spot that I had previously left to go in search of this turkey.  That spot was almost a half mile away and there is no way this bird could have flown over there without me seeing or hearing it. If that wasn’t strange enough, I quickly realized that the second set of calls was not truly identical to the first set of calls, and this made my hair stand up on end. The chances of hearing an old gobbler like this is rare, but the odds of hearing two separate raspy toms like this on the same day in the same mile section is exceptional. I would actually describe it as impossible.

As I was trying to gather my thoughts and piece this weird puzzle together, it hit me that the entire area was mostly quiet and eerily still.  I had heard no other turkeys even though I knew that at least three dozen birds lived in this exact valley. I had heard no frogs and no song birds chirping. I decided not to dwell on it.  I began to head back towards the sounds of the second hot gobbler. I crossed a large draw, made my way up the hill and as I stealthily got within 100 yards, the bird shut up. Just like before.

As my mind was processing all of this deception, the original set of gobbles fired up again from the same spot that I had originally rushed to at first.  There was no mistaking what was happening to me; I was being decoyed on two sides of a large valley by a couple of turkey mimics. Whoever or whatever it was that was doing this was intelligent and purposeful. I was being played, but by whom or by what? I am almost positive that it was not human beings doing this to me. I knew the area and I knew every parking spot and every hiding place; they were empty.

I will never know for sure who or what was responsible for messing with me that day, but over a decade later I was watching television and I heard something that caused my heart to race and gave me an instant forehead sweat. It was a show about Bigfoot. The hosts were talking about the widely accepted theory by Bigfoot researchers that these ape-like animals make loud tree knocks by banging rocks or limbs onto the trunks of large trees to communicate.  They also spoke of the possibility that these large hairy legends are also experts at mimicking animal sounds.

As mentioned above, the morning was “mostly quiet,” I had ignored a couple of unexplained loud bangs that sounded like two baseball bats banging against each other.  When I originally heard those knocks, I assumed it was squirrels working over some nuts from their winter stash. I remember thinking that they are normally not that loud, but I was in the excitement of the hunt and I tried to ignore it.  I am not saying that I was duped by a couple of Sasquatches amusing themselves that day, but what would you think?