The Misery of Defeat 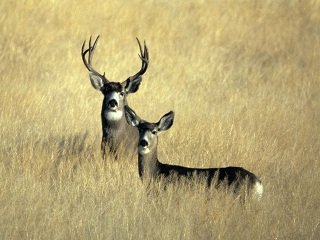 Most seasoned hunters have missed a shot–either with a bow or a gun–at a big game animal. A miss is momentarily devastating, but dealing with the mental and emotional fall-out that comes from failing is never easy. This article will not give you any tips on how to rebound from a mistake, but rather, it is to commiserate with those of you who know that sickening feeling.

During my early hunting career with only 10 years of big game pursuits under my belt, I felt the sting of not only missing an animal, but that animal was a world-class Mule Deer buck which would have easily been the Oregon state record and a massive feather in my hunting cap.

It was in an area of eastern Oregon that was not supposed to have any bona fide monsters, yet he appeared out of thin air on a rainy ridge. He was uphill at 300 yards, feeding towards a patch of alders. I knew I only had seconds to make a shot.

As my heart began to jump out of my chest, I quickly found a giant root wad from a large cedar tree that had blown down. I fell into a perfect shooting position with a rock solid rest, and as I noticed my cross hairs not even moving to the rhythm of my pulse, I squeezed off the magic round that was going to make me a hunting hero.

As I gathered myself from the report and looked through the scope to watch my trophy fall, I was devastated to watch him walk calmly into the woods, never to be seen again.  I should have known everything was too perfect in that root ball. My brain began to explain what my adrenaline had hidden from me in that moment of haste, and it was unsettling. My rock solid rest was perfect because I had made the rookie mistake of letting the butt of my rifle rest against a spiral twist of leg-sized root.

That meant no chance for the rifle to recoil, so naturally the barrel jerked up and my shot was at least three feet over my aim point. Simply put, it was a clean miss. A stupid miss. I went and checked for blood of course. I even circled the area for hours hoping for some miracle, but miracles don’t happen when you do everything in your power to prevent them from happening. I screwed up, and it hurt because this buck was every bit of 36 inches wide on his inside spread, and he had the longest tines and back forks that I had ever seen.

He was a possible top 12 buck in the world, and I was possibly the world’s worst hunter on that day. I had that buck already mounted on the wall. I was sick at first, and I think I wanted to cry from being a bone head, but mainly I was broken inside. I wanted to stop hunting, but I didn’t. I wanted to rebound and come back next season even better prepared, but I never shook the depression of failing so bad. Some might point out that it was, “just a buck,” or “it could happen to anyone, get over it,” but I couldn’t. I still can’t even 20 years later.

I have had other notable misses since then. A Pope & Young Roosevelt elk is my #2 miss of all time, and a 170 class Whitetail is my current #3 miss.  Those were mystery misses though, so the unknown factor saves me from stewing about them.

Just like in life, every one of my failed shots lives with me like a great regret, and there really is not a lesson to be learned. I messed up, and that gorgeous buck will always be the #1 trophy in my mental wall of shame.