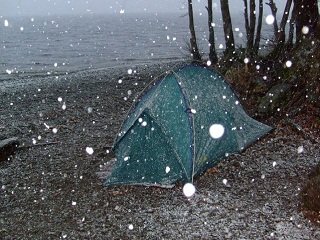 While recounting how a series of bad decisions left me stranded between two swollen rivers in Alaska in part one of this story, I can now tell how only a small streak of good luck delivered me from extreme danger.  Up until now, I had made several mistakes which all amounted to improper planning. I had neglected making specific plans, checking weather reports, and I had neglected my common sense by relying on someone else to make some decisions for me.

We already had bad feelings before we crossed the rising river, but once on the other side, we both knew we might have jumped the gun in our excitement to hunt.  The feeling was in the air, but we both ignored it and carried on setting up camp. Our make-shift camp would be our home for the next three days as we found ourselves snowed in, iced in, and rained-in. I was stuck in my sleeping bag for 36 hours at one time and my cheap tent began to fail.  As slow leaks turned into steady drips, there was no way to escape being wet.

Getting wet in the middle of nowhere while realizing worse weather could be coming, is very demoralizing. It makes you want to curl up and seek shelter both physically and mentally, but you can’t do that while trapped in the wild of Alaska. I had to do mental exercises to keep engaged and I had to hope that my Wiggy’s sleeping bag would live up to the claim that it could keep me warm while wet. Thankfully, it did keep me warm while wet. If it failed, hypothermia was only minutes away as the moderate winds created a wind chill that went below freezing temperatures.

Then, as suddenly and drastically as the storm blew in on us that first night, there was a stillness of wind and the rain briefly stopped.  We had long realized that there would be no hunting on this trip and now we knew we had to act during this short window of opportunity to get out of there.  I tore down my shelter and packed my pack. Time was precious so I had what they call a “yard sale.” A yard sale is when you have survival on your mind and you abandon all non-essential items from your back pack so you can travel light and fast. I threw out a couple hundred dollars’ worth of gear and headed for the flooded river we had walked across only days earlier.

We inflated one of our rafts even though I had lost a paddle somewhere along the way (another mistake), and knew we only had one shot to make it to some shallows on the other side or we would be swept down river into endless whitewater.  We mentally rehearsed our water route, got in our inflatable raft, and we shoved off in the ultimate gamble.  We hoped and prayed the odds would be in our favor to just make the other side.