How to Judge Bears, Part One 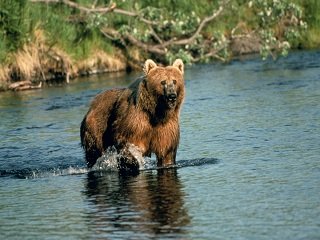 Although most bear hunters pursue black bears, general bear field judging standards can also be applied to grizzly and brown bears as well.

To begin with, the size of a bear is often referred to as its squared size.  Squaring a bear requires two measurements; the first is the length between both front claws while the arms are stretched out to the side. The second measurement is from the tip of the nose down to the end of the tail. If you add these two measurements together and divide by two, you get the square.  For example, if a bear has a front claw distance of 10 feet and a nose-to-tail length of nine feet, the square is 9.5 feet.  It is a very simple way to adequately record the size of a bear, and it also is a great place to start when it comes to field judging.

Another way to determine and record sizes on bears are their skulls. The skull measurement is what all the record books measure to determine trophy status.  Most of the time, a large skull is synonymous with a large square measurement, but that might not apply to old bears and young bears who have superior skull-growing abilities. However, head size is another good starting place when trying to size up a bear.

For me, the head size is my first tool of judgment as it can be determined from great distances. If any bear looks like it has a small head, you have to give it a second look since all heads look small when they are on a large body. Bear cubs and small bears always wear a large looking head, so I pay attention when I see a smallish looking head.

Next, I look at the ears. As a taxidermist with over 20 years of experience, I have decided that most bear’s ears are about the same size. So, if you see a bear with big, goofy looking ears, the chances are pretty good that he is a small one. Another clue that gives away a small bear is the ears appear to be on top of the head and not down on the side of the head.

The next body part to look at after the head is the chest area. Young bears have narrow and slender chests. If you look at a young or small bear from a side profile, you will likely see both elbows. A large or mature bear will have a deeper chest which makes it impossible to see both elbows.

Read part two of this article for more ways to properly determine the size of bears in the field.