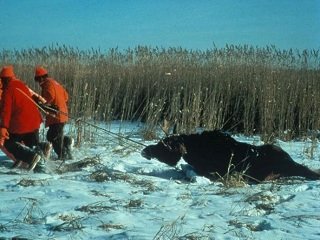 Most hunters will never hunt a moose, let alone see one, so if you are not fortunate enough to live or hunt in moose country, here is how a moose is handled in the field by most Alaskan hunters.

Everyone has probably heard the old cliché that once the moose is dead, the work begins.  That is mostly true, but finding a live moose can also be a chore and often is. The first time I witnessed an in-field moose dressing, I was impressed. Seeing a massive animal over a thousand pounds laying on the ground is intimidating, but trying to figure out how you break one down into barely packable loads is hard to do when you have never killed a moose.

Here in Alaska, moose hunting is a big deal. Most Alaskan hunters who have never killed a moose have at least helped someone get one out of the field, and it’s not as hard as you might think with at least two guys working on it.

Most hunters gut the animal right away, but this isn’t necessary. It can be saved for later when the head and hind quarters are off so the rib cage is easier to handle. If not gutting first, the first thing to do is to start skinning the animal from the back legs forward. This will allow for the upside hind quarter to be removed first and placed in a game bag. Once the exposed side hind quarter is removed, the front quarter is next removed. By this time, the entire hide on the exposed side of the moose is skinned off and laying on the ground next to the back of the animal.

Once the two top side quarters are removed, the top backstrap can be removed and placed in a meat bag. Next, the head is removed. If you have not gutted the animal, now is the time. With the head removed, backstrap, guts, and two exposed quarters removed, the animal can easily be manipulated onto its other side by rolling it onto the already skinned hide.

Once the animal is rolled over, both remaining quarters can be skinned and removed along with the other backstrap. Most units require the entire rip cage to be removed from the field, so all that is left is to remove the neck meat and place it in a meat bag.  That’s it. It is really simple and if two or more guys are available, it can be done in a little over an hour. It is quite an impressive feat and even more impressive to watch.