Sometimes it’s Best Not to See in the Dark 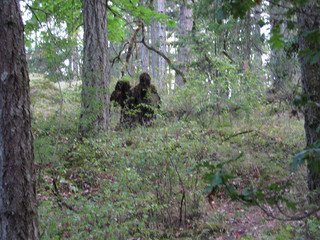 If you have hunted long enough, you will run across some very strange things while in the woods. In my twenty plus years of hunting and guiding, I too have had my share of unexplained incidents. I don’t like to share them with people too often as I don’t like to re-live some of them. Like every other human, I like to avoid ridicule. Here is one tale that I will share and leave up to you to figure out what terrified me two consecutive mornings in the thick, dark timber of a remote Illinois farm.

I was the first person to hunt this farm in almost a decade. It lay between a massive national park and a large farm that rotated corn crops and bean fields each year. The timber was thick and dark, and I found a pinch point with a large trail running right by a nice fat Locust tree. I managed to get my hang-on tree stand about 16 feet off the ground, and when hunting season rolled around, I hunted this stand as long as there was southerly wind. From where I parked, it took me a good 25 minutes to walk to this stand, but the virgin hunting grounds made it worth it.

The year was 1993, and I found myself frustrated from a month of bowhunting and no shot opportunities. Big bucks were there, but I was just having bad luck. To improve my chances, I decided one day to get in my stand an hour before dark to let things settle down. I managed to crawl up into my stand and sit there with my bow in my lap waiting until first light. There was no moon and no stars; it was pitch black.

After 15 minutes, I heard some large foot falls crunching leaves and twigs. It was about one hundred yards away and coming at me fast. At first, I fantasized that it was a large buck heading my way, but when it got within 50 yards of me, it was obviously not a buck. It was nothing on four legs. It had the steady, thumping cadence of a man walking, but this was too big to be a man. I felt the feet hitting the ground as whatever it was walked by my tree and kept going. There was a fence it had to cross, but it never broke stride and continued on past the fence.

The next morning, I took a flashlight with a white beam instead of my red-beamed hunting light.  I was determined to see what this creature was if it happened to come by again. To my horror and surprise, here it came again down the same trail, right at me again; the same steps, the same noises, the same heavy footfalls.

As it got abreast of my tree, I stood up in my tree stand and turned the light on. The creature froze. My light failed to operate. I had checked bulb and batteries the night before, but the light would not work. As I tried over and over again to make the light come one, the creature continued on again and out of earshot. I have no idea what it was, but I know what it wasn’t. It wasn’t a four legged animal and it was not a person. That is all I know and I still have nightmares about it today.