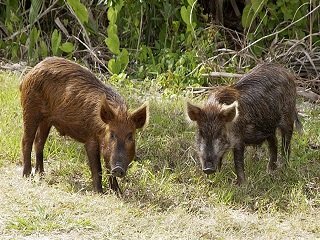 If you think there is nothing to hunt during the summer months that can possible hold your interest until deer season, think again. In the next couple of weeks, Live Outdoors will be featuring five prolific animals that you can hunt during the summer. Even if you live in a state that offers access to some of these animals, the chances are good that a short drive will take care of that small detail. Today, wild hogs are on the menu.

Did you know that most states have viable wild hog populations to hunt? It’s true. And most of those states consider feral pigs a nuisance quadruped and allow hunters to shoot them year round. A lot of states also allow night hunting for hogs, and that fact alone can add some diversity to your hunting portfolio that you might not otherwise get to experience on other game animals.

Traditionally, the South has been the gateway to hunting wild hogs, but they have existed in other places for decades, if not centuries. Hawaii and California are often overlooked and under-mentioned when it comes to wild hogs but they have large populations just waiting to be hunted. Would it surprise you to know that wild hogs are also located throughout the Midwest, and can even be hunted in states like Colorado, Minnesota, Nevada, New York and Oregon? Michigan does not allow hunting of wild hogs, but their numbers are spreading and several counties have agreed not to prosecute people who kill them. The one constant when it comes to feral pigs is; they need to be hunted and controlled.

Hunting them is not that difficult either. Most state wildlife management agencies boldly provide information on feral pig’s exact population locations. This is also one of the few big game animals where hunters and landowners are glad to give strangers access and intel so that they can help whittle down their numbers.

Methods for hunting them are not difficult. You can spot and stalk low-lying swampy areas with heavy cover and occasional openings and meadows. You can set up tree stands or blinds at water holes and hunt them in the heat of the day, or you can bait them (where legal) and enjoy hunting in the cool of the morning or evening. There are also people who like to night hunt with night vision or infrared scopes, or by the old fashioned method of spotlighting.

There are tons of opportunities for hunting wild hogs, so don’t stop hunting just because it is summer.