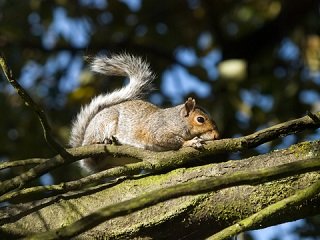 Summertime is supposed to be a fun time, but it’s not for most hunters. Traditionally, summer represents a long, hot wait until deer season. Not anymore. There are several animals to hunt during summer and we have just featured wild hog and coyote hunting opportunities in the last two articles. Today, squirrels are in the crosshairs.

There are several erroneous beliefs about eating game animals that are killed during the summer, but I can assure you that there are generations of Americans that have never suffered from any illness due to eating summer-killed game meat.

Yes, squirrels can have Warble and Botfly larvae embedded under their skin in warm months, but they almost never penetrate into meat tissue. Even if they did, they would appear in an easily noticed boil that can be removed. It is imperative to properly cook all game meat anyway, so don’t believe the summer meat naysayers. Just cook your meat and handle it efficiently and properly.

It is a good idea to have a cooler with you or nearby so that you can quickly clean your squirrels and get that meat cooled off as soon as possible. They don’t take that long to clean so taking care of them as you hunt should not be a hassle.

What is the difference between hunting squirrels in the summer than in the winter? Summertime offers millions of leaves and other plant growth which can allow a squirrel to easily elude hunters. However, all that cover can also allow a hunter to sneak in closer to an unsuspecting squirrel unlike the bare trees of winter allow. It can work both ways.

One great thing about hunting squirrels is that you can hunt them with just about any weapon.  Although .22 rifles and shotguns are popular, you can also hunt them with high-power air guns or standard pellet guns. Using pressurized weapons comes in handy if you are near any urban settings with houses, people and pets around.

Some hunters set up under trees that are being worked by squirrels and wait for a shot, but using a call to lure them into a shooting lane is also a high-success technique. If legal, using bait can be very effective and I know people who set up multiple ground blinds over bait and hunt them that way. Again, if baiting, make sure it’s legal and make sure you get into your stand or blind before first light.

Squirrels: the other dark meat.