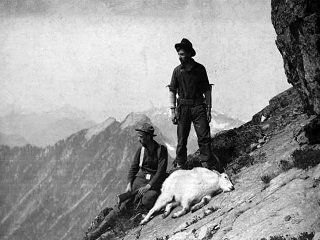 Most hunters never fight to fill their lungs with oxygen at high altitudes while hunting, but those who do face one of the most challenging and most dangerous places in the great outdoors.

According to Princeton University, high altitude is defined as 8000-12,000 feet above sea level. While most people can function at 8000ft with only minor to no side effects, most people will experience some form of discomfort. Some negligible side effects of high altitude are reduced muscle strength, longer response time, reduced energy and degraded motor skills.

Almost everyone has heard of altitude sickness, which is officially called Acute Mountain Sickness (AMS), but how exactly is that defined? It can involve headaches, nausea, loss of appetite, dizziness, severe fatigue, and having a hard time sleeping.  The only way to fix these symptoms is to immediately head down to loer elevations. However, AMS is not the only danger lurking in high places.

Some lesser known, but more extreme aliments of high altitude are HighAltitude Cerebral Edema (HACE) and High Altitude Pulmonary Edema (HAPE). HACE is often associated with mountain climbers as they lose their mental faculties and don’t think properly. This can be a dangerous condition for obvious reasons, but HAPE is serious too. HAPE is when fluid builds up in the lungs and breathing becomes difficult due to the lungs inability to process oxygen properly. Again, the only way to treat these illnesses is to descend immediately to lower ground and seek medical attention.

Most mountain hunters are aware of the fact that acclimation is the key to avoiding all the above problems, which are mostly caused from ascending too quickly without giving the body time to adjust. Generally, three days is an adequate amount of time to get acclimated so hunters who are not used to high altitudes and are traveling to the high hunting areas, might want to schedule a few extra non-hunting days just to get used to the hunting area.

Hunting at higher elevations puts extra stress on the body and mind no doubt, but some hunters simply have to continue on a hunt regardless of conditions. If you are one of these hunters, try to take it easy the first couple of days and ease into the hunt. Your body will thank you later for not jumping into your hunt.  High altitude hunting is not for everyone, so take that into account when you plan your next big game hunt.