Wolf Hunting No Longer a Secret 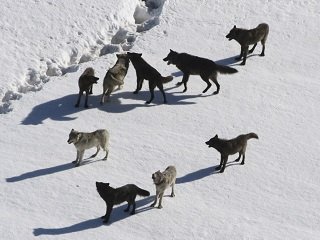 Wolves, the distant relative of man’s best friend, seem to polarize the population when it comes to deciding whether to hunt them or protect them. Although once nearly wiped out, many states now sport a healthy wolf population, and what a lot of people don’t know is that wolf hunting is occurring probably in your backyard.

As a hunter, this is very exciting. The idea of bringing down one of the ultimate North American predators is exciting and since most people won’t get the chance at a polar bear or brown bear, this creature could be the most exciting animal in your trophy case.

Currently, Michigan has released 1200 wolf tags for purchase. They are available for $100 dollars for residents and $500 for non-residents (this seems to be a common price in other states).  They are available from now until October 31st (or until sold out). Yet, there is very little press surrounding this release because of people demanding that wolves should be put back on the protected list.

Roxane Werly, of UpNorthLive.com reports: “The 2013 wolf hunting season will open on Nov. 15 and will run until the harvest is met, but no later than Dec. 31. The bag limit is one wolf per person per year and trapping will not be allowed. Firearm, crossbow and bow-and-arrow hunting will be allowed on public and private lands.”

Michigan is not the only state to have enough wolves to begin a wolf hunting conservation program. The following states have wolf hunting opportunities: Wisconsin, Minnesota, Wyoming, Idaho, Montana, and Alaska. States that border these are also building populations and may offer wolf hunts in the future. Each state has unique tag, hunting areas and hunting bag limits so if you want to hunt a wolf check the states regulations first. Some states also allow trapping, so again check the regs for the type of harvest you want to attempt.

As mentioned above, the wolf, probably because of our collective love of the dog, raises a lot of voices crying for its protection. Keep Michigan Wolves Protected is a Michigan group aiming to collect at least 225,000 signatures to put wolves back on the protected list. They are not the only group around the nation that wants to permanently end wolf hunting.

If you want to hunt wolves someday, or believe that wolves need to be controlled, make sure you use your power to vote, and pass on the hunting lifestyle when you can.