How to Prevent Game Meat From Spoiling 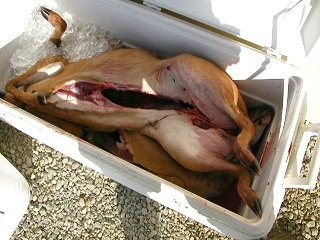 I have read hundreds of people’s opinions and views on keeping meat from spoiling while in the outdoors. The problem of spoiled meat is really prevalent in western states where some locations are far away from civilization and the nearest meat locker. Alaska is famous for hunters being stranded in the middle of nowhere having to deal with massive amounts of raw meat after a caribou or moose kill. Keeping meat from spoiling is not always easy, but understanding what causes meat spoilage is in fact, easy to understand.

There is only one thing that causes meat to spoil; bacteria. Fighting bacteria can be the ultimate war, but preventing bacteria from spreading is a battle that could help you win the meat spoilage war.

Temperature is the main culprit when it comes to spoilage. The heat lets bacteria breed and spread and if it is hot or really warm outside, there needs to be an effort to get meat cooled down fast. Cooling tactics could be as simple as finding some shade to hang meat under or as extreme as placing meat in plastic bags and submerging them in a cool mountain stream. I have heard of submerged meat in plastic bags keeping for over a month when it was placed in glacier-fed streams in Alaska. Obviously you don’t want to ever test that tale, but theoretically it has to be possible.

The next greatest aid in facilitating bacteria growth is a knife. I have watched Alaska’s own Department of Fish & Game perpetuate a meat spoilage myth by not clearly explaining one of their own rules which requires some moose hunters to leave meat on the bone until it is either at the hunter’s home or dropped off at a processor. Some hunters have assumed that leaving meat on the bone must enable it to cool off easier than deboned meat. This is not true. The real and under reported reason for this rule is to prevent hunters from spreading meat spoiling bacteria via hundreds of knife cuts.

With each cut of a knife, bacteria are being spread. Unless you are sterilizing your knife blade after every single cut, you are not only helping spread bacteria, but you are actually spreading bacteria on both sides of each cut. Bacteria are bad enough but when you are purposefully spreading it to every ounce of meat with a knife blade, it makes contamination a sure thing.

The bottom line is that bacteria are our enemy, if you have to make a thousand cuts, or you can’t get to a freezer fast, cold temperatures are your best friend. So, plan accordingly and stop bacteria from ruining your hard won game meat.