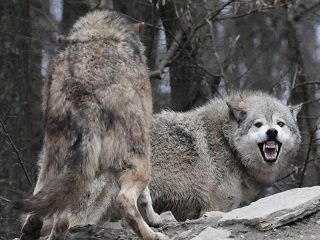 While lying in his sleeping bag in a northern Minnesota camp ground last week, 16 year old Noah Graham, of Solway, was attacked by a 75 pound wolf when it grabbed his head and would not let go at around 4am. At the time, the teen was camping with five friends at West Winnie camp ground by Lake Winnibigoshish, about 45 miles east of Bemidji.

Graham screamed and tried to escape but the animal’s jaws maintained a firm grip on his head. “I could feel it rip into my head,” the teen said. "I had to reach behind me and jerk my head out of its mouth," added Graham. "After I got up, I was kicking at it and screaming at it and it wouldn't leave. But then after a while I got it to run away."

The Minnesota Department of Natural Resources (DNR) spokesman, Chris Niskanen, stated made it a point to express how unique such an attack is while referring to it as, “extremely rare and unusual.” DNR Regional Manager, Tom Provost, also added, “It’s the first one (wolf attack) that I’m aware of.” Most wildlife officials only claim that there have only been two documented fatal attacks on humans by wolves ever, one in Canada and one in Alaska, however there is no speculation on how many ‘undocumented’ attacks could have taken place.

The injuries to Graham were not serious but he did say that it was “the worst pain of his life.” Graham suffered a gash that was 11 centimeters wide and he also received 17 staples to close the laceration.

The specific wolf thought responsible for the attack was caught and killed two days later. A necropsy was performed and a DNA test was done to confirm it is the same animal that grabbed the teen. The animal in question had a deformed jaw which caused its jaws to be unable to align properly. This might explain the bold opportunistic attempt to utilize Graham as a food source. The wolf tore through two separate tents that night and also punctured an air mattress.

Graham did offer some interesting details about the incident. “There was no sound at all. Didn’t hear it. It was just all of a sudden there,” he explained. Graham called his dad right after the attack and his dad told him to dial 911.