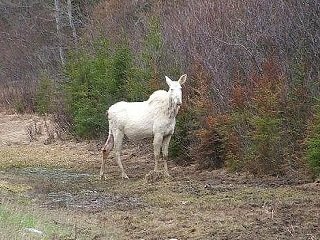 Unless you were living under a rock or out hunting during the last two weeks, you probably heard about the storm of outrage regarding two hunters in Nova Scotia killing a trophy class moose that was all white in color. The local native tribe, called the Mi’kmaq (MicMac), claim white animals are sacred to them and they are not happy about some ‘non-native’ hunters killing the gorgeous animal. Some of the anti-hunting media have latched onto the incident to make agenda-driven hay.

I have studied the facts and read every article I can find regarding the killing and much of the media’s info about the situation is dubious at best.

First off, although the animal was all white in color, it does not mean it met the requirements to be classified as an albino. Albinism is not just being all white in color. I have not read where any biologists have confirmed that fact. The albino claim is not really important, unless you have an agenda to inflate the value of the animal to create a more inflammatory story angle. The word ‘albino’ always stands out as useful rhetoric by anti-hunters and the uninformed, but it is not a desirable trait for a wild animal.

Albino or not, what the story boils down to is two non-native guys were legally hunting with legal hunting licenses on property they were legally allowed to hunt. They legally shot an animal that was legal to shoot.

If you are scratching your head right now wondering why the outrage came about it, stand in line. The outrage most likely derived from jealousy and envy over the trophy aspect of the kill, but it eventually turned into a cultural dog whistle of insensitivity towards the natives by non-natives.

Technically the Mi’kmaqs are on record as having a reverence for white animals and placing a high value on them. That fact is irrelevant to this case as the animal was not killed on native lands. The fact of the matter is that political correctness has encroached on every part of our lives and hunting is no different. A small minority of people who seek to control others are now looking for any occasion to demand that someone be offended. Sadly, this seems to be the case in Nova Scotia where two hunters should be able to celebrate and enjoy their trophy animal.

Instead, the hunters were falsely shamed into donating the animal’s hide to the Mi’kmaqs and they even felt a need to apologize for killing the animal although they violated no laws, no rules, no ordinances, no agreements and certainly no unwritten courtesy. These legal hunters did everything legal and although they are not able to celebrate, I celebrate them and their fine animal.

SHARE
TWEET
previous articleTip-Up Tips, Part One
next articleFive Reasons for not Getting an Elk
Overture-undertone navbar fix
Monitoring string
monitoring_string = "68ec033d54c4f3b1ca4aca7f4c1e01ca"
a