A Deer Disease No One is Talking About 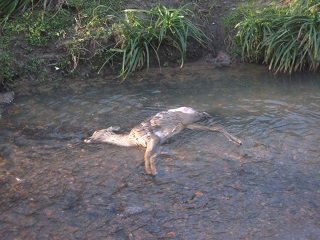 EHD is classified as a hemorrhagic disease that occurs in whitetail deer. It is an infection by a virus called Orbivirus, and it is not the same disease as the infamous ‘Bluetongue’ disease. EHD is transmitted by midges, mosquitos, and gnats that are vectors (carriers) of the virus. These vectors are prominently found in small, stagnant waterholes, so it’s no coincidence that the sometimes fatal disease has become prevalent in areas affected by drought such as the Midwest which has indeed suffered from dry conditions in the last two years.

As a taxidermist and sometimes deer guide, I've heard reports, the last couple of years, of deer numbers mysteriously being low in some places. I know of one Midwestern outfitter that had many early photos from game cameras of trophy deer, but he never laid eyes on any of them during hunting season. This might sound like a normal occurrence, but he found some of them dead during the season with no obvious cause of death.

Michigan is one of the states that was hit hard with EHD. Tom Cooley, DNR wildlife biologist and pathologist had this to say: "Due to the prolonged, dry, hot weather this year, we are not surprised to see EHD emerge again. Mortality numbers will depend on how widespread the disease is. Die-offs usually occur within one watershed area. If multiple watersheds are involved, the total mortality is higher."

EHD is explained as a sudden onset of loss of appetite, excessive salivation, weakness and eventually unconsciousness. Many of the dead deer are found near or along bodies of water. There is no known evidence that humans can contract the disease.

Missouri is another state that has felt the impact of EHD. Missouri Department of Conservation spokesman, Emily Flynn, claimed that during September of last year, they already had reports of 2800 dead deer. “Not all deer die from the disease. In severe cases of past outbreaks, up to 40 percent of local deer herds have been lost in some areas of Missouri,” added Flynn.