Where Do Deer Hide During Hunting Season? 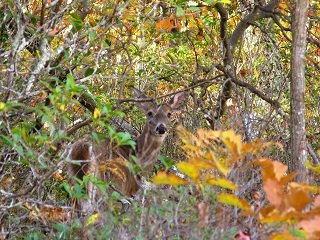 I have read and heard a pile of theories, and I even remember reading about a study Dr. James Kroll (the deer doctor) did in the south involving wild deer in fenced in areas. They had placed tracking collars on some mature bucks and they learned more about how bucks avoid hunters than how they hide. To summarize, the bucks would find a low spot in heavy cover and sit tight no matter what took place around them during the daylight. Finding one of those hiding spots on your own land or lease is not easy.

All of us who have hunted deer know about the times when all sightings just shut off like someone threw a magical switch and all the mature bucks disappear. My uncle, who started hunting deer in Pike County, Illinois decades before it was known as a top deer destination, told me about a time when he found a trophy buck’s hideout.

My uncle was hunting the edge of a pig farm in the 1960’s. Most farms had pigs back then so it was no big deal to see hog houses everywhere, but one midday while still hunting, my uncle spied a trophy racked buck laying in an abandoned hog house. It went against everything he knew about deer. Deer weren’t supposed to hang out in caves and a hog house is essentially a low-roofed cave. How did that deer ever learn to stay safe in such a place?

I recently talked Rod Sullins of Southeast Kansas Outfitters (SEKO) and the bucks just disappeared during this year’s rifle season. It is legal to bait in Kansas and the deer weren’t even showing up to eat delicious corn during below-freezing temperatures. He solved the mystery when he gutted a buck and studied its stomach. It was a very good year for acorns this year and the deer were holing up and eating acorns, which is nutritionally superior to corn, so they had no reason to move very far from their snack bars in the deep woods.

When I was younger, I remember walking down a hedge row during hunting season (without a gun of course) and I was shocked to see a trophy buck laying between two hedge apple trees in the skinny row of trees. I quickly glanced at him as I kept walking, and he just looked at me out of the corner of his eye like he was wishing I wouldn’t notice him. He did not belong there at all.

I have heard many stories of deer laying in grass and not budging when hunters walk within close range of them. It doesn’t seem natural, but it sure makes sense. Deer can hide in a lot of places, but how they hide will always be somewhat of a mystery.