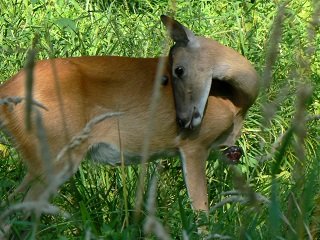 I recently watched a hunting show where a hunter harvested a buck which was covered in softball to soccer ball sized lumps that we hunters refer to as goiters. Although the deer looked like it needed a mercy killing, I wasn’t sure that I’d be able to eat the meat of an animal stricken with whatever it had. I had always heard the term ‘goiter’ used but I decided to find out more about the subject.

Like humans, deer can get goiters. They are from similar causes. In deer, it’s most likely an iodine issue. The soil where the deer gets its nutrition is low in iodine, and the deer’s thyroid responds by swelling and causing a goiter. However, any issue with the thyroid can produce a goiter. Lack of iodine, too much iodine, hypo-thyroidism, hyper-thyroidism and just about anything else that can go wrong with the thyroid will cause a goiter.

However, the deer I watched had several growths, and deer, like people, will get a goiter at the base of the throat which is where the thyroid is located. So, what were the other growths on the deer I watched?  Well, there are several things they could have been. Like people, deer can get tumors both cancerous and non-cancerous. The growths may have been fatty tumors or cancer.

An abscess can also cause a large growth. An abscess is an infected area that can grow quite large before it bursts. I once had a horse that got an abscess the size of a basketball on its neck.  If the deer has had an injury, it’s possible the skin healed over and the infection localized and filled the area with pus. One other cause is cutaneous fibromas. These are often referred to as warts and can get quite large on a deer. They are caused by a skin virus.

The most important part of knowing what the cause of a growth on a deer is knowing if the meat is safe to eat. If the cause is a true goiter, the meat should be safe. An enlarged goiter is easy to see and remove, and we don’t traditionally eat this organ anyway. If the cause is a fatty tumor, it should be just under the skin. Simply remove it when you skin the animal, cut the meat out around it and the rest of the deer is fine to eat.

If the deer has a cancer that is not skin or fatty related, or any type of abscess, it is safer to call your state wildlife agency and report it. After an exam, they can let you know if the meat is safe, and will possibly even issue a new tag if it is not safe to eat. It doesn’t hurt to have them check it out and is much better than wasting the deer by abandoning it because you are unsure.