The Elk No One Knows About 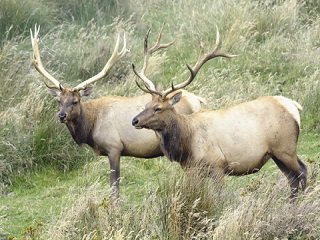 When you think about elk, more than likely you picture the regal Rocky Mountain Elk, or his darker cousin, the Roosevelt. If you go further north, you may even picture the Manitoba Elk, but very few people know or talk about the small Tule Elk of California.

The Tule Elk, named after a favorite bulrush food source found in swampy areas of California, is a native species. It was abundant and widespread until the stress that followed the gold rush destroyed its habitat through the introduction of cattle along with over-hunting. Thought extinct, a small herd was rediscovered in the 1870s by a rancher and protected. Today, Tule elk can be hunted and if you want to fill a North American Elk Slam (if it existed), or an elk species on your way to a super slam; you would want to add this elk to your trophy room.

The smallest of the elk in body weight, the Tule, on average, is a couple of hundred pounds or more under its cousins the Rocky Mountain and Roosevelt. It is also the lightest colored of the elk, having a more straw colored coat. Since it is only found in California, it is a very unique North American trophy.

There are two ways to get a tag to hunt this rare trophy. You can attempt to draw a tag, which like any drawing situation can be take many years (at least you can earn preference points if you don’t draw), or you can purchase a landowner tag. This is not a cheap hunt. If you are lucky enough to draw, most hunting is on private land and will require permission or payment. There are also outfitters who sale their hunts with tags, which although it may seem expensive, could actually be a cheaper way to go.

A non-resident California hunting license will run you $159.58 and a non-resident tag will be $1328.40 if you are lucky enough to draw. If you buy a landowner tag, it could cost you any amount. But if you don’t draw a tag, expect to pay upwards of $12,000 for either a semi-guided or guided hunt on private land with a landowner tag. One outfitter offers a fully-guided, four day hunt for $17,500 with tag so you can see the range of prices you can expect to pay.

Even though this may be an expensive hunt for a non-resident to pursue, the Tule Elk is a unique species native to North America (California) and a must have for any North American big game hunter’s trophy collection.

SHARE
TWEET
previous articleBass Lures of 2013: The Good, the Bad, and the Ugly, Part Two
next articleSnowshoeing Guide: What to Wear
Overture-undertone navbar fix
Monitoring string
monitoring_string = "68ec033d54c4f3b1ca4aca7f4c1e01ca"
a