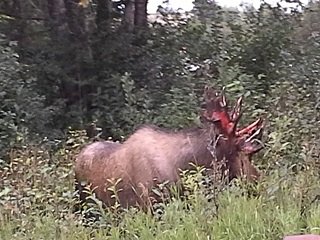 Recently, the national news is reporting that the Minnesota moose population is in a serious and steep decline. In fact, the Minnesota Department of Natural Resources reports that the population has declined 52% since 2010. This is not the only troubling news; it appears that other northern moose states and British Columbia are also reporting moose population declines. In response, all moose hunting has been suspended in Minnesota, and reduced by half in Montana. What is the cause?

No one really knows for sure, although moose are being tracked and radio collared for answers.  There are several theories however. Some claim climate change. It’s no secret that this has been a record breaking year for low temperatures in the northern part of the country. However, moose are well designed for cold, so although this may account for some, can it account for all? On the other hand, other experts claim it has been too warm in the past few years, and the parasites that prey on the moose, like ticks, flies, worms, flukes etc. aren’t being killed off by long harsh winters causing more stress and poor health in the moose.

A recent study in British Columbia theorizes that an epidemic of pine bark beetles are killing off the trees and leaving the moose exposed to human and animal predators. Minnesota seems to be the only state willing to report that wolves may be the cause of some of the problem. All areas mentioned as having die-offs are in the process of rebuilding wolf packs. However, the facts remain that no one reason has been proven or seems to be the root cause.

One heartening fact is that the Yukon has not noticed any decline in their populations. This may support the tick theory and thereby the climate change theory. Winter ticks haven’t been being killed off because of shorter, warmer winters in the last few years, leading to anemic and weak animals either susceptible to disease, or predation. Also, Yukon’s hunting practices don’t allow for the taking of cows and have severe penalties for this.

Unfortunately, scientific studies take time, if ticks are the issue, this past harsh winter may tell a tale. If hunting or poaching are a factor, stronger regulation and the limiting of animals may tell a story as well. If wolves are a factor, only regulation of the wolves will tell the story. Regardless, this is a troubling fact, and the future of moose hunting may be in danger.