The AK-styled Mossberg Blaze 47 is an accurate and cheap rifle chambered in .22LR that seems to be designed to please those of us who’ve always wanted an AK, but never wanted to pay full price. The rifle can hold 10 or 26 rounds, depending on the magazine you opt for, and comes with a few other options to help you customize it even further.

From the moment I took this rifle out of the box, it was incredibly accurate up to (and probably past) the 50 foot mark. Most of my shooting took place at 15, 25 and 50 feet, where I was able to hit center mass each time I squeezed the trigger. My best guess as to the reason why it is so accurate is two part: First, a set of fiber optic sites that allow the shooter to get onto target quickly. And second:  The simple fact that .22s just don’t produce any amount of felt recoil. Furthermore, the rear sight is adjustable for elevation and windage by rotating the adjusters.

I had a blast sending more than 500 rounds down range with this fun little plinker. And, even though I fired from the standing position for a majority of those shots, the quality of my shots never failed. Front sight wobble was left to a minimum because Mossberg lessened the weight of this rifle as much as they possibly could by using composite materials wherever they could. The rifle weighs in at just 4.5 pounds, and is barely noticeable in your hands. 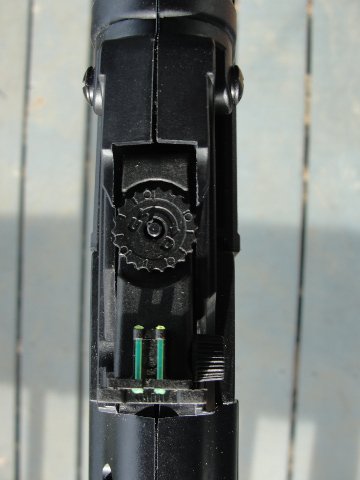 Although the rifle being lightweight is great in terms of shooting and staying on target, it does seem to come at the cost of quality. Most of the gun is polymer, making it feel as though it were cheaply made. Making matters even worse, I felt as though I’d break the grip right off of the lower receiver just by handling it.

The Blaze 47 has an AR style mechanical flip safety that has some serious play in it. However, no matter how hard I tried, the safety would not fail. But it does feel flimsy and weak, and from my experience, plastic does not generally get stronger as time passes by. Instead, it gets weaker, and I do believe that this rifle could become hazardous at some point.

When you opt to buy this fun, accurate little plinker, you have a few different options about which style you’d like. For example, if you live in a more restrictive state that limits the mag capacity, you have the ability to pick a 10 round mag instead of the higher capacity 25 round magazine.

You also have the option to choose the adjustable butt stock, a synthetic stock, or a more authentic looking “wood” butt stock and fore-grip. Personally, I’m happy I chose to test the adjustable one because I’m bigger than the average shooter, and it took me a little while to find the most comfortable shooting position.

Even though it seems to be cheaply made, this rifle is an absolute blast to shoot. Personally, I think instead of calling it the “Blaze 47,” they should have called it the “Blast 47.” I found myself not wanting to put the rifle down, and ended up running through a monster box of ammo in just a couple of hours.

Also, you get an authentic (enough) looking AK-47 without having to pay the $600+ it would take to buy one chambered in a more powerful cartridge – which, depending on how you look at it, could also be a negative.

Furthermore, if you’re all about supporting America and her hard working citizens, you’ll love the fact that it is made right here on American soil.

Unfortunately, Mossberg decided to make an AK style rifle in a cartridge that is almost non-existent whenever I go to the store looking for a few boxes. In fact, whenever I go to my favorite big box retailer, I can’t find a brick of .22lr for less than $65, which is simply ridiculous. And, whenever they do have it in stock, they limit how much you can buy.

That’s an issue because this rifle is meant to be taken to the range and fired. It is meant to enable the operator to have fun while getting some cheap target practice in. Unfortunately, .22 is so scarce right now, that it won’t fill its purpose.

Gun manufacturers will have to wake up and realize that most shooters aren’t into the .22LR AR/AK style rifles anymore. It is just too hard to find ammo for them at a good price. And, to be honest, most people would like something with a bit more power.

Finally, while cheap in price, you usually get what you pay for. The 16 inch 1:16 twist barrel seems to be one of the only pieces of metal on this rifle causing me to wonder if it is worth the MSRP of $329. Of course, street price should be a bit lower than that, and once the rifle is shouldered and fired, the overall flimsy feel of this plinker begins to fade away. And, even though it is flimsy, it isn’t loading a 7.62X39 AK cartridge, so the polymer receiver may suffice.

SHARE
TWEET
Evergreen, Gun review, Guns and ammo
previous articleGet Out Alive: How to Survive in the Desert
next articleUse a Float for Summer Crappie
Overture-undertone navbar fix
Monitoring string
monitoring_string = "68ec033d54c4f3b1ca4aca7f4c1e01ca"
a