Daily Driver to Off Road King 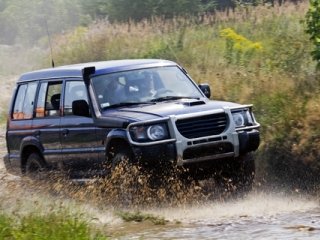 I’ve found throughout my travels that most people who decide to invest in a four wheel drive truck do so for reasons beyond wanting to be able to make it home on snowy roads during winter. No, it seems to me that truck people want to be able to go places. Places that perhaps people in a Mercedes wouldn’t, or couldn’t, go. That desire, combined with today’s massive four wheel drive aftermarket part industry has given pick-up owners the ability to morph their daily driven vehicle into a multi-purpose piece of machinery that’s capable of toting the kids to school, while still being a respectable force during a weekend outing with the local four wheel drive club.

Although not superbly documented, historians believe that the first mechanical four wheel drive featuring drive shafts and a transfer case, reminiscent of what we know today, was produced in 1902 by Dutch-based manufacturer Jacobus Spyker. In 1903, Daimler Benz followed suit as the world’s first auto manufacturer to produce a line of four wheel drive vehicles with all wheel steering.

Technology has come a long way in the past hundred or so years, and thus so has the evolution of four wheel drive vehicles. Today, these durable, rugged buggies come in a variety of configurations ranging from the standard pick-up truck to sport utility vehicles, and their drivers are still in the mood to put these vehicles to the test.

The ability to take a four wheel drive straight from the dealer’s lot into rough terrain is completely possible. However, many folks are willing to invest the cash to customize the performance of their daily driver in an effort to improve performance both on and off the pavement. Some of the most popular, and reasonable, modifications for trucks that won’t be seeing any time up on trailers include tires, lighting, lift kits

Tires are a part that is going to need to be replaced sooner or later anyways. Upgrading your tire and wheel package to accommodate a slightly wider tire with a more aggressive tread pattern allows vehicles to gain traction in off road conditions by increasing the surface area of rubber meeting the road. As an added bonus, many of today’s mud and snow tires have been designed in a manner that greatly reduces road noise, meaning that you don’t have to put up with that high pitched whining noise on the freeway that is synonymous with large, aggressive tires.

Suspension modifications, like lift kits, go hand in hand with the upgrade of tires. Hoisting your truck a few extra inches provides additional clearance for larger tires to flex and turn, as well as overcoming obstacles that may come your way on the trail. Lift kits are available from a number of major, reputable manufacturers and come pre-fabricated for nearly every four wheel drive application that you could imagine. Whether you’re looking for a 3 inch boost, or a big ol’ 8 inch lift, the kit for your ride is out there.

Lighting options for off-road adventures are as unique as the people who purchase them. From upgraded head lights to light bars and spot lights, options allow drivers the opportunity to customize lighting used to check out obstacles on the trail once the sun has said farewell. Anyone who has been in unfamiliar rocky territory as dusk approaches knows that being able to see what’s in front of, and underneath you, is key for getting your rig out unharmed.

The modifications that can be made to four wheel drive vehicles are endless. From the basics, many drivers move onto upgraded axles, transmissions and steering components. The best part, however, is the ability to build a four wheel drive truck that is uniquely suited to your needs both in town and out on the trails.

Major truck manufacturers don’t market their four wheel drive line-up based on “attractive lease offers” or “stylish interiors,” but rather the fact that you can haul a giant boat and your dog with the thing while traversing a mountainside. Four wheel drive auto makers and aftermarket manufacturers understand why you’re not buying a minivan and they, too, think these vehicles are meant to be not only rugged, but fun.