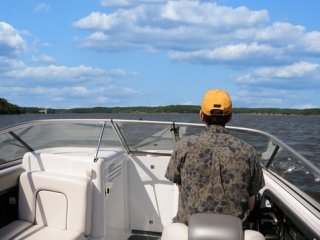 To most folks, the thought of drinking and climbing behind the wheel of a car is immediately written off. We’ve been taught that drinking an operating a motor vehicle is a dangerous proposition, with potentially deadly consequences. However, there’s an unnerving trend among boaters that is every bit as dangerous as drinking and driving: drinking and boating.

According to the California Department of Boating and Waterways, alcohol is a factor in over 25% of all fatal boating accidents. And some lakes are taking a stand against the danger to boaters, swimmers, fisherman and recreationalists on the water. An increasing number of lakes and riverfronts across the National are being designated as “dry.” What does this mean? While as a whole it is still not illegal to consume alcohol while boating, in these areas, it very much is. Rangers and law enforcement are checking coolers on the beach and the shore, and fining boaters who are in possession of alcohol whether they are the one operating the boat or not.

But what do boaters think? To many, there is nothing more relaxing than enjoying a cold beer on the lake after a day of fishing, wakeboarding or just soaking up the sun. But, much of that same crowd is getting sick of those who turn the lake into something it’s not meant to be: a drunken pool of danger for responsible recreationalists.

Even in areas that haven’t been deemed totally dry, States are taking a stand. In 2009 the National Association of State Boating Law Administrators launched “Operation Dry Water.” This weekend-long event aims to educate boaters about BUI; the DUI equivalent of the boating world.  In 2010, all 50 States participated in the weekend event and made a startling number of contacts with boaters. Just how startling?

In a three day period during 2010, Operation Dry Water arrested 322 people for BUI; which is generally defined as having a blood alcohol content over the legal limit, which is the same for boating as driving. During the same time, over 4,100 citations and 7,522 warnings were issued for some kind of safety violation ranging from speeding to not having life jackets onboard.

What does this mean for boaters? The lake has the potential to be a dangerous recreational outlet. As boaters it is our responsibility to take note of our actions and create an environment that is safe for our fellow lake lovers and their families. Alcohol consumption on lakes should be considered every bit as dangerous as It is around vehicles. While boat drivers need to be aware of their drinking habits and turn over the wheel to a sober boater, passengers also need to watch out for too much of a good thing. Drowning will ruin a good time in no time, so please, enjoy alcohol especially responsibly out on the water and maintain our lakes as a place for fun; not tragedy.