The Yellowstone Winter Use War 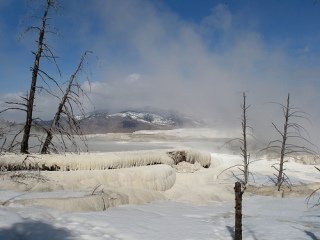 During the summer months, Yellowstone National Park is buzzing with people. Anyone who has visited the park in the midst of peak tourist season knows the meaning of a “bison jam” and has experienced the informal roadside gatherings to check out a passing bear or wolf. However, once snow blankets the unique volcanic landscape of Yellowstone, America’s first National Park becomes an entirely different wonderland accessible primarily by snowmobile.

However, winter use in Yellowstone National Park is undergoing review as part of a two year process to establish a viable long-term plan for winter use. While the park is intended for the enjoyment of visitors, park officials are working to make a plan that allows reasonable, fair access to winter recreationalists while simultaneously protecting the unique natural resources of the park.

If anyone believes in our right, as Americans, to access our National Parks, it’s me. However, as an outdoorswoman, I also understand the need to manage resources responsibly so that Yellowstone, and other reserves impacted by harsh winter weather, hold the same allure for future generations. Top concerns of conservationalists surrounding excessive snowmobile use include air quality impacts, Finding a balance that meets both of these requirements is putting the National Park Service to the test as it operates Yellowstone under an interim winter use plan for yet another year. Snowmobile emissions, noise pollution and the effects of winter crowds, as the number of cold season Yellowstone visitors has burgeoned to over 100,000 people.

Currently, after roadways become inaccessible to motor vehicles due to the harsh effects of a Wyoming winter, Yellowstone becomes accessible only by snowmobile or snow coach. The interim plan allows for 318 snowmobiles and 78 snow coaches to operate in the park each day. A snow coach is a van or double cab pick-up that has been mounted on snow tracks. It’s basically a comfortable snow cat designed to allow tourists access to the park’s interior without having to endure the cold nose that comes along with a snowmobile ride. Each of these modes of winter transportation are used to take winter park visitors to popular attractions, like Old Faithful, that are otherwise closed off to the outside world after peak snowfalls.

However, the debate about snowmobile accessibility in the park dates back over a decade. In 1997 a suit was filed  by the Fund For Animals to stop all snow grooming of paved roads within Yellowstone. Since snowmobiles were only allowed on groomed roads, this action essentially led to a ban on snowmobiling within the park in 2000 after a full environmental study. The next major action took place when snowmobile manufacturers and enthusiasts filed another suit and pushed for a revised environmental impact statement. This action eventually led to an overturn of the ban in 2003, with limited amounts of snowmobiles and snow coaches allowed into the park with a licensed commercial guide.

As outdoor enthusiasts, it’s important to find balance in our sports. The debate over Yellowstone winter use examines the wellbeing of the environment and the park’s native animal populations on one end, and the harsh economic and recreational impact of highly restricted snowmobile use on surrounding towns at the other. Regardless of what happens, this process demonstrates the importance of being an advocate for outdoor motorsports. As part of our great (though sometimes slow-moving) nation’s processes, the public is allowed to comment on Yellowstone’s winter use plan. Use this opportunity to come to the table with those that share your viewpoint, and offer others, to ensure a healthy balance for the winter fun, and health, of one of America’s most beloved treasures.