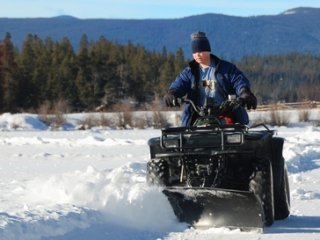 Getting a new parts catalog in the mail is like Christmas in this house. We sit around, flip through it, and imagine all of the ridiculous things that could be done with the doo-hickeys and doo-dads that pepper the pages of catalogs from all the major outdoors stores and ATV suppliers.

However, I feel that the pending onset of the winter months actually warrant the purchase of a few new accessories for folks around various parts of the country. While quads provide a source of entertainment year round, they can also become a highly utilitarian tool when snow and ice cause messy driveways and country roads. The best winter accessories, of course, depend on where you live. But for those of you in cold country, there’s plenty of cool ATV stuff that you can definitely find a good excuse to buy.

ATV and UTV plow blades are manufactured by a number of reputable brands and attach to the vehicle via a mounting kit and push tubes that secure to the frame. The blade itself is lifted by a winch mechanism and allows the operator to push clear snow up to about 75% of the blade height. While this won’t make your machine into a road department snow plow, it may allow you to get out of your driveway and get some clearance to the nearest paved thoroughfare. And it’s a whole lot more fun than shoveling.

Snow tracks are oft touted as the ATV accessory that lets you go anywhere. And while that may be true, track kits are inherently expensive and somewhat labor intensive to install. Not to mention, bulky to store in the warm months. Studded tires provide sturdy lugs in combination with studs to allow for maximum traction on icy terrain. However, it doesn’t stop at tires. New innovations, like the J-Wheelz product. This interesting contraption is partial cone with lugs that bolts onto the wheel of your ATV. The idea is to create a wider footprint, and thus, better flotation and traction through mud or snow.

Call me a wimp, but I get cold after riding in near freezing temperatures. As nice as those handy little hand warmer pouches are, they go cold after awhile and require you to actually remember to put them in your pack. However, seat and handle warmer attachments allow you to heat up your mitts or booty at anytime. Entire seat replacements and handle grips that slip onto your stock bars are controlled by a system that requires only basic wiring know-how to install.

Whether you use your ATV to explore the snow laden backcountry, or simply battle Old Man Winter in your driveway, a few new cold weather accessories are sure to make your winter ATV riding more fun.