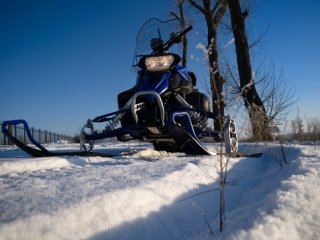 Ice and snow are usually thought of as positive things in snowmobiling. After all, snow means trails that are ready to ride. However, varying weather conditions require that snowmobile riders pay extra attention to their surroundings. While riding quads on dirt roads, obstacles and danger are typically in plain sight. Once terrain in blanketed in snow, it’s next to impossible to know what lies beneath from atop your sled.

One of the most common dangers for snowmobile riders is the risk of avalanche. While nobody likes to think that they could get caught in a landslide of snow, it happens. And it’s good to be prepared. First and foremost, riders should know how to recognize conditions that raise the risk of avalanches. Here’s how it usually happens:

As light, powdery snow pack falls on layers of older, melting or icy snow, different layers of snowfall are created that can break apart and slide down the slope when impacted by an outside force. And by an outside force, I mean you and your snowmobile cutting across a slope. When riding in hilly conditions, always be aware of recent weather conditions. Has the winter been a mix of cold and warm temperatures allowing snow to melt and re-freeze to a hard pack? Has a fresh layer of powder covered the slope? Beware of conditions and don’t take risks. If you’re unsure of the stability of a slope, it’s not worth increasing your risk of becoming one of the 150 people killed in avalanches each year.

But what if it’s too late for that? You say you already have a wall of snow chasing you down the mountain? There may still be hope. Snowmobile riders can try to engage the throttle of their sled and power down the hill in front of the avalanche. In the event that seems hopeless, bail off near a tree and try to hold on for dear life. And in the worst case scenario, if you’re swept off of your sled, most experts recommend making a swimming motion with your hands and arms as fiercely as possible to try and stay aloft in the slide and create air pockets around you in the event you get buried.

Tools like avalanche beacons are also recommended for snowmobilers exploring the backcountry. These devices can be used by your whole party and will help rescuers locate you from above if you become trapped. The other best tool you can have in the event of an avalanche while riding is, perhaps, your buddies themselves.

If an avalanche is triggered, watch where your friends are from a safe distance. Keep a close eye on their location and you’ll have a greater chance of locating their whereabouts after the slide has stopped. Wear bright gear and make yourself easy to see in case it’s you they’re trying to watch.

But above all else, use common sense. Check with the weather service and Forest Service for avalanche warnings before taking part in any backcountry riding. Stay out of areas known for avalanche risk and use your head – so you can live to sled another day.