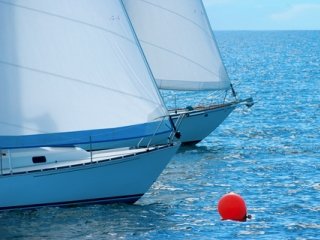 I typically am a major fan of anything that goes fast. On dirt or pavement. The idea of speeding in the water gives me an epic case of the willies. Likely because I am deathly afraid of being attacked by anything that lives in bodies of water; rainbow trout included. However, I have an extreme respect for others that take on the feat of racing across water.

A major sector of the ATV, dirt bike and even snowmobile community find an allure in racing. And that I understand. There is something freeing about being able to drive, or ride, as quickly as you can across a hard surface. Conversely, I feel that boat racers are one socket short of a full set. Water is choppy, ever-changing and again, may I point out, that creepy little creatures live in it. That doesn’t seem to stop water race enthusiasts.

While sailboat races are popular among the nautical crowd, motorheads can find enjoyment in everything from cigar boat racing to the absolute insanity of hydro boats.

A la Miami Vice, cigarette boats are typically fiberglass-hulled boats 30 to 50 feet in length, with a deep “v” shape; making them ideal for racing off shore and explaining their nickname of a “go-fast.” These boats are so fast, in fact, that they were once popular among rum smugglers during the prohibition, garnering these watercraft a second nickname of “rum runners.” However, it’s not just smugglers who love the speed of cigarette boats. Widely purchased by racers, these boats also appeal to folks who love a good wind-blown hairstyle and a wind burn from whipping over wakes.

On a smaller scale, hydroplane boats bring boat racing to inland lakes, and even rivers. And it’s ridiculous. These sleek boats are essentially shaped like space ship meant to, you guessed it, hydroplane across the water at speeds that have reached world records of up to 300 miles per hour. On a side note, I’m almost completely sure that an “outrageous home video” show has never been produced without a clip of one of these boats crashing. Never. Which obviously helps translate the danger of hydroplane boats. However, advancements in safety like driver safety capsules and emergency exit hatches have reduced the incidence of driver injury and death.

And yet, smaller still, jet ski racing allows individuals to race across the water straddling their craft. Held both off-shore an on lake courses, riders typically focus on speed and making their way around obstacles, or an oval-shaped course. Heck, some courses even include jumps.

The point of all this? It seems that certain people are just born for speed. Regardless of whether you love the feel of bumps in a dirt road, as you rock and roll on your ATV. Or perhaps maneuvering wakes on a go fast boat is your style. Either way, racers are born to race. I just like to race on hard ground. Where sharks don’t live.