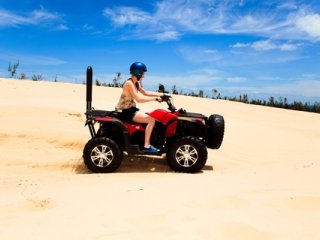 My bachelorette party involved no strippers. No hard alcohol, or straws in vulgar shapes. It did, however, involve plenty of dirt, camping and cooking over a wood fire, and a very confused group of men. While exploring Forest Service roads around a piece of family property on my last romp as a single woman, I had rudely parked my truck in a spot that blocked a part of the road. While my entourage of women and dogs hiked around in the pines, we suddenly heard a deep voice. “Hey! Hello?” Somebody wanted by.

I yelled back and began to walk back through the woods to move the truck. I was met at the truck by a confused set of stares as I, then 7 other women and an old black dog emerged from the woods. “Oh, I’m, uhh, I’m sorry,” the other driver stammered. “Is this some kind of women’s retreat?” I guess you could call it that.

More and more women are finding joy in spending time four wheeling, riding ATV’s, snowmobiles, jet skis and taking advantage of the great outdoors. And contrary to the belief of many, these gals aren’t just tagging along with the boys for a weekend ride. In fact, women’s only rides are becoming increasingly popular among outdoorsy women who hit the trails, and leave the boys behind.

The types of rides vary. Some are as simple as a few girlfriends loading up the family trailer with their quads and heading out for a Saturday morning ride. Others, however are more organized. Across the United States, off-road clubs are growing in popularity with the female population and wives of off-road club members are becoming members themselves. These clubs often organize trail runs for women with Jeeps, four wheel drives or ATVs.

Meanwhile, gals who love the snow are teaming up and heading out on snowmobile rides, some of which are multi-day escapes completely organized and ran by women. They do the shopping, the tent-pitching, the cooking – and the riding. Some organized rides are so large, in fact, that they are garnering the attention of hundreds of women and raising money from ride fees that’s being donated to local charities. Leave it to the girls to figure out how to have fun and support a good cause all at once!

Gone are the days when the “boys club” is simply being taken over by the girls. Today, we’re creating our own clubs and finding joy in being the kind of self-sufficient, outdoor-loving, gear head kind of gal who redefines a “girls night” as time in a tent, rather than just out to dinner.