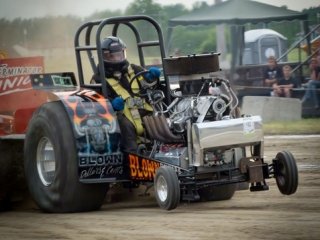 There were a series of years in my life that I spent nearly every weekend participating in truck pulls. My baby was a 2008 24-valve Cummins-powered Dodge pick-up, complete with a set of exhaust stacks that had originally come off of a Peterbilt and tuning that made my heart skip a beat. Today, that Dodge is long gone as my husband and I work on building a new truck equipped for pulling; this time with Duramax power under the hood. However, I recently saw an advertisement for an ATV pull event at a local truck pull and was intrigued. And confused. This was a joke, right?

Come to find out, it’s quite popular. And cool. The sport of pulling originally began as a competition amongst farmers who were sure that their horses were stronger than their neighbor’s. To prove the strength of their team, farmer’s would hook their horses to a plow and begin pulling. More and more people would hop on board for weight until the horses could no longer pull the plow. The horse team that pulled the most weight won bragging rights. Not surprisingly, the ego of people the world over has not evolved much since the 1800’s, and as times changed, so did the face of pulling.

Today, the sport of tractor, truck and ATV pulling consists of towing a weight transfer sled down a 300 foot long, compacted dirt track. Vehicles are hooked to the “sled “via their tow hitch and given the green flag to utilize the power of their vehicle to tow the sled as far as possible in a straight line. As the sled moves down the track, a large weighted block transfers from the back of the machine to the front. As weight moves forward, resistance on a pan at the front of the sled is increased, making it harder for the vehicle to move the weight. A “full pull” is typically considered 300 feet, although it can take a highly modified vehicle to achieve the glory of pulling past the 300-foot marker.

While the sled used for truck and tractor pulling is a relatively large piece of equipment, at about 25’ long. However, smaller scale sleds are utilized for ATV and garden tractor pulling that, by rule of thumb, produce a weight about 5 to 6 times heavier than the ATV used to pull it. This is quite the feat for any vehicle, but the thrill of pulling is a country adrenaline rush that motorsports junkies will truly enjoy!

ATV pulls are becoming increasingly popular at pull events across the country, from the annual Harvest Festival in Sublimity, OR to consideration as an addition at even sanctioned events ran by bodies like the National Association of Diesel Motorsports. And the best part? Anybody can pull. Many events allow even kids to participate, with proper safety equipment, of course, and divide classes based on engine size and modifications in an effort to give everyone a fair shot at winning.

With entry fees hovering in the $20 range, an ATV pull is a down-home, family-friendly, and unique way to use your ATV. Events typically require participants to show up a few hours early to register and pass a quick tech inspection, which also gives participants time to hang out with their pit crew (also known as wife, or buddies) and get to know other riders.

If you’re looking for an ATV event that fosters a little camaraderie, friendly competition and puts your ATV to the test, check out a local ATV-pull this summer. Fair warning, though, pulling is addictive. Then again, what part of riding isn’t?