Making It Yours: Customizing the Look 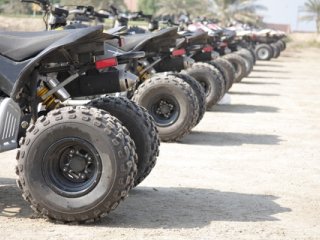 Everyone has a buddy that has a “decal problem.” His truck, quad, and ice chest are covered in every decal that ever came in a parts box, not to mention the custom stickers he’s picked up at outdoors shows over the years. “If it flies, it dies.” “I love the smell of gasoline in the morning.” “Quack Addict.” We get it. You hunt, and think that this ATV is fun. But honestly, your quad looks like the inside of a bathroom stall at that shady bar downtown.

Making an ATV, truck, jet ski or boat your own can be difficult. With so many accessories available, and an ever growing selection of catchy stickers, it’s easy to go overboard in a hurry. However, holding back and making a plan to customize the look of your ride can make your rig stand out on the trail and turn heads for its style, which is far better than turning heads because people are trying to figure out why on earth your custom plate reads “BGMAMA1.” It’s cool that you bought your truck from a grandma. It’s not cool that you never changed plates, Big Mama.

Let’s talk about ways to make a major impact, with statement changes to your ride that transform the look of a ride and make it stand out without looking like you’re trying:

The color of your ATV, UTV or jet ski is the bulk of its appearance beyond body style. While the quads on today’s market come available from the factory in an array of colors: blue, red, white, some shade of dark green; these colors don’t always match the personality of the person riding. Or, at some point, you simply decide that it’s time for a change. After market plastics can be purchased to replace the fenders and seat foundation of your ride in nearly any color: tangerine, maroon, lime green, midnight blue, you name it, it’s out there. The cost varies on the manufacturer you choose, and exact vehicle that you’re fitting, but you can plan to pay between $500 to $1000 for a full set of ATV plastics. However, this cost is also associated with changing the entire appearance of your ride.

If a change in color isn’t enough for you, graphics may be just the ticket. The important thing to remember is that a graphics kit is, in theory, different from “stickers.” While it may be tempting to simply buy a few flame decals and throw them here and there, you’ll likely end up with a rig that looks like its been the victim of a bottle rocket attack. Conversely, graphics kits are specifically designed to create a look that contours and compliments the body style of your ATV, UTV, truck, boat or jet ski. Designs can be found in everything from checkered flags, to flames and skulls or an American flag rippin’ in the wind.  Depending on what you’re covering graphics will run you from $200 to $1000 for boats or pick-ups, but you’ll have to try to avoid the urge to sticker over your fancy new sticker.

Aftermarket wheels and tires can make a significant difference in the appearance of a vehicle. There’s a reason 20” wheels are a common stock option for pickups and SUV’s on today’s market: they look better. The same can be said for aftermarket wheels on ATV’s and UTV’s. With a wide selection of options available, many ATV wheels mimic their larger counterparts and have just as much curb appeal. Or, is it trail appeal? Either way, paired with a set of tires tailored to your application, a new tire and wheel set-up can be the finishing touch to a major looks overhaul.

No matter what look you’re going for, investing in major items, rather than a hoard of small ones, can make a significant difference in the long-term appearance of your rig while also making your ride the best looking one on the trail.