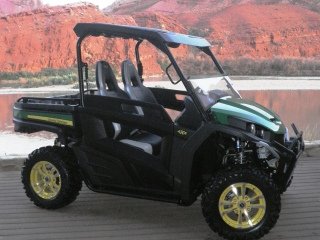 This week John Deere took a giant bite out of the recreational utility vehicle (RUV) market by unveiling its new high-performance Gator RSX850i. The new Gator RSX side-by-side is the result of John Deere fusing the long recognized utility and rugged reliability of the iconic Gator brand into a cutting-edge speed machine at the top of its new class.

John Deere is a global leader in industrial and military equipment applications. So, introducing the new Gator RSX into the recreational vehicle market might seem like a slight departure from company tradition. However, John Deere maintains that adding modern innovations like advanced power, speed and handling to the already established Gator is, “the next step in evolution for the Gator.”

John Deere invented the Utility Vehicle (UV) category when it introduced the first utility vehicle in 1987. The success of the original All Materials Transport (AMT) vehicle led to the advancement and creation of the first model Gator in 1992.  In the last 21 years, the Gator has kept John Deere a dominate player in the utility vehicle marketplace, and that dominance has forced its competitors to focus on alternative markets (recreational) for survival.

With the launch of the new Gator RSX, the Gator brand will now be synonymous with speed, performance, power and agility, while still honoring its utility heritage.  The Gator RSX comes in three models; the RSX850i Sport, RSX850i Trail and the RSX850i Base model which allows for owners to choose from over 80 after-market options that can be added to the vehicle.

This new Gator can reach speeds of 53 mph, and pack a payload of 800 pounds; it has an on-demand true 4WD system, 10.3 inches of clearance, double-A arm front and rear suspension, a 1200 pound towing capacity, and is the ultimate candidate for pride-in-ownership with unbelievable attention to detail in every part of the design and manufacturing process.

The Sport model is the star of the group with its colorful, high-style appearance, which makes it look like a speeding sculpture. The Trail model is a colored-down version that maintains its loyalty to hunters, fishermen and back country enthusiasts by featuring camouflage and a factory installed 3000 lb. Warn winch. All models carry a 400 lb. cargo box.

The new Gator RSX is all about fun. When asked what it was like designing the new Gator RSX, utility vehicles project engineer, Tim Ulschmid, echoed that fact, “Without giving too much away, we had a lot of fun designing it.”

They call it “A whole new species of Gator,” and the new Gator RSX is the latest cutting-edge example of why John Deere has become an American icon.